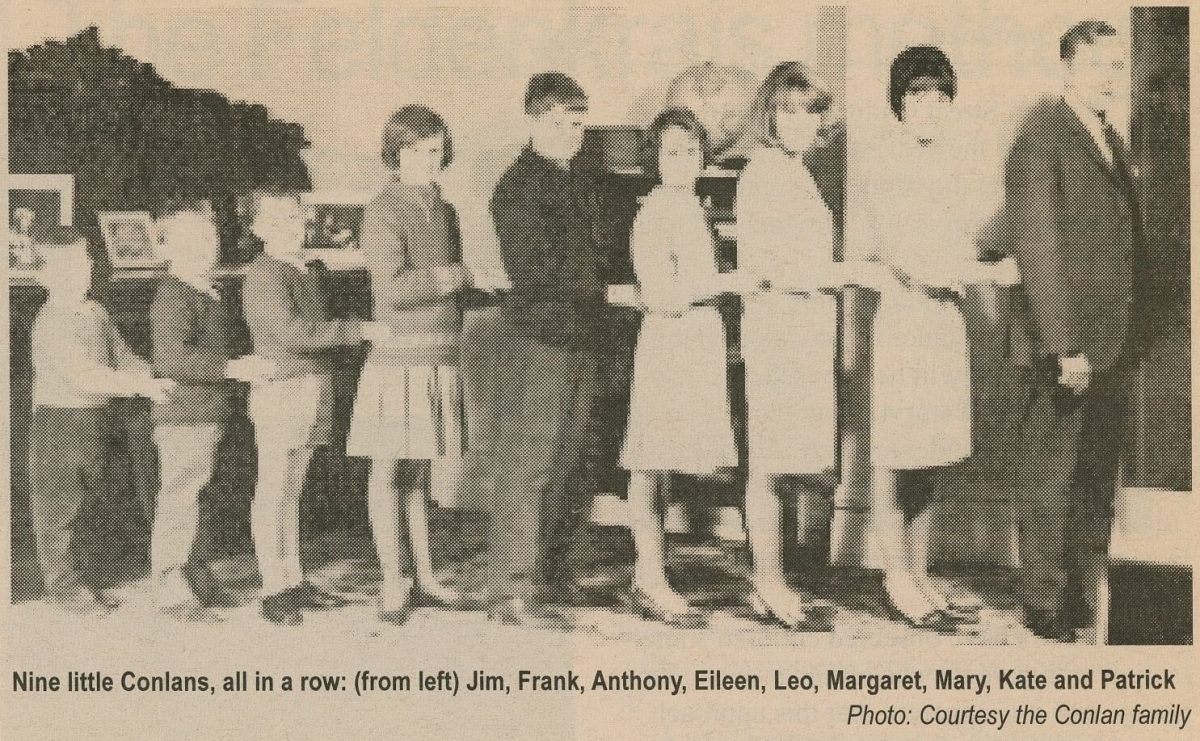 I was curious to see it after noticing online that it now boasts “21 desirable residential units over four levels”. I knew Mulcahy’s in a more innocent time. My parents, Leo and Kath Conlan, bought the pub in 1969 and, except for the period 1972-76 when we leased it out, they worked in it until 1979. As well as being a business, it was also a family home for all nine Conlan children.

Mulcahy’s was in a tough part of North Melbourne, surrounded by railway yards and factories and there was nothing too “desirable” about the pub in that era. We had three downstairs bars: the public bar, the saloon (where beers cost one cent extra) and the plushly wallpapered lounge that was seen as just a bit posh.

I vividly recall the frantic lunchtimes when the railwaymen and factory workers would pour in for their standard four quick pots and a counter lunch. My sister Marg would yell orders into our wonky intercom to Bill the cook who would sweat away in the kitchen as he somehow dished up 250 meals over two hours.

The main bar was highly territorial. The railwaymen stood near the pinball machine, the transport drivers huddled near the pool table then, suitably distant, the men from Barastoc Fertilisers drank in a tight group. They absolutely stank of chicken manure and the bar would reek for hours.

We’d be flat out pouring beers, taking care never to allow a glass to stand empty for a second. I’ll never forget the constant hum of the bar packed with hard-drinking men, the blue shroud of cigarette smoke and the smell of beer-sodden carpets that drifted through the pub.

Dad ran the show, Mum looked after the family, the accounts and the floats, and all the Conlan children pitched in. I recall 12-year-old Jimmy barely able to see over the bar as he served beers and handled the till while wearing his blue and gold De La Salle blazer.

The family lived upstairs on one side of the building. On the other lived the boarders. One night a lodger was “entertaining” a lady friend and a lively dispute ensued over money. Dad went to check and ended up dragging the woman, naked and swearing loudly, down the stairs while all nine children looked on wide-eyed.

Many of the boarders were unforgettable characters. “Bluey” was employed by the railways but never seemed to work. He spent all day propped in the bar, sipping beers and duping gullible patrons with his profitable party trick of dropping an egg into a glass.

“Simon” and “Bundy Bill” were both ex-drovers and boasted of their skill in the saddle. We fully believed them until the time Simon took some of the younger Conlans horse riding and fell off his horse. He was laid up in his upstairs room and couldn’t walk for a week.

Then there was “Pieman” who worked for Herbert Adams. My brothers would hand him false orders for 20 dozen pies then, when he’d lugged them into the pub from his van, we’d tell him with crestfallen faces that the order had been cancelled. There were surprisingly few fights, possibly because Dad and Mum, both teetotallers, were so popular. But once, an angry drinker crawled over the bar and my teenage brothers and Dad had to hold him then hustle him out into Victoria Street. Most of the fights involved women, scratching and hair-pulling, in the ladies lounge.

But there was always more fun than fighting. Once, some well-meaning patrons heard a rumour that Dad had died and thoughtfully inserted a moving tribute to the memory of the late Leo Douglas Conlan in the Sun. I suspect they swore off the drink when they saw him walk into the bar.

We were a footy pub in winter. On Saturdays, when North Melbourne played at Arden Street, locals would drop in for a few beers and a counter lunch, then buy half a dozen cans each, the old steel type, and head off to the oval where they’d drink them quickly so they could stand on them to watch the play.

Mainly, however, Mulcahy’s was a racing pub. Every Saturday afternoon, 3DB’s Bill Collins’ call of the races would be blaring from the bar radio, drinkers would be placing illegal bets, beer would be flowing and the till kerlincking away healthily.

In the evening, the pink Sporting Globe, full of the day’s racing results, would be strewn everywhere, while the tiny bar TV would show the trots from the nearby Showgrounds. Between races, above the hubbub, Mary Hardy would screech raucously on Seven’s Penthouse Club.

Every day ended at 10pm when Dad or Patrick would ring the bell and call “Time gents, please” to clear the bar. We’d shuffle the stayers out then start the endless tasks of cleaning, vacuuming and polishing. My nightly tasks included taking Chris the dog for a walk around the block.

Visits by the licensing inspectors kept us all on our toes. They came to check the books, monitor our trading hours and inspect the kitchen. One day they caught my brothers Leo, Anthony and Frank on top of the bar, playing cricket while using an ice-block as a ball.

Like so many publican families, we were good Irish Catholics. On Sundays the whole family would attend mass at St Mary Star of the Sea in Howard Street, then buy crusty Vienna loaves from the Italian deli in Queensberry Street.

Later, most of us would pile into the Humber and Dad would drive up to Kinglake and along the fire tracks near Toolangi. After the hubbub of the hotel, he loved the quiet and the isolation. We’d cook sausages on a roaring fire then, heading home, Mum would lead us in the rosary.

All my recollections are good ones. I remember North Melbourne’s village-like atmosphere and the thriving small shops along Errol Street. And I recall how my friends loved visiting Mulcahy’s because of the free sarsaparilla and chips.

Perhaps the only shadowy memory was when we returned in 1976 after briefly leasing the business out, to find it sadly run down and attracting a seedy clientele of petty crims and bikies. It was a bit frightening for a while until Dad banned the troublemakers.

We finally sold Mulcahy’s Hotel in 1979 and the Conlan family’s hotel era was over.

Many years later, when curiosity led me to visit the old pub with Mum, we found a side door open and stepped inside. We were shocked that it had apparently become a squatters’ refuge.

Just for a moment it seemed as if those wonderful years when the Conlans ran Mulcahy’s had never happened. But I know they did. I was there.