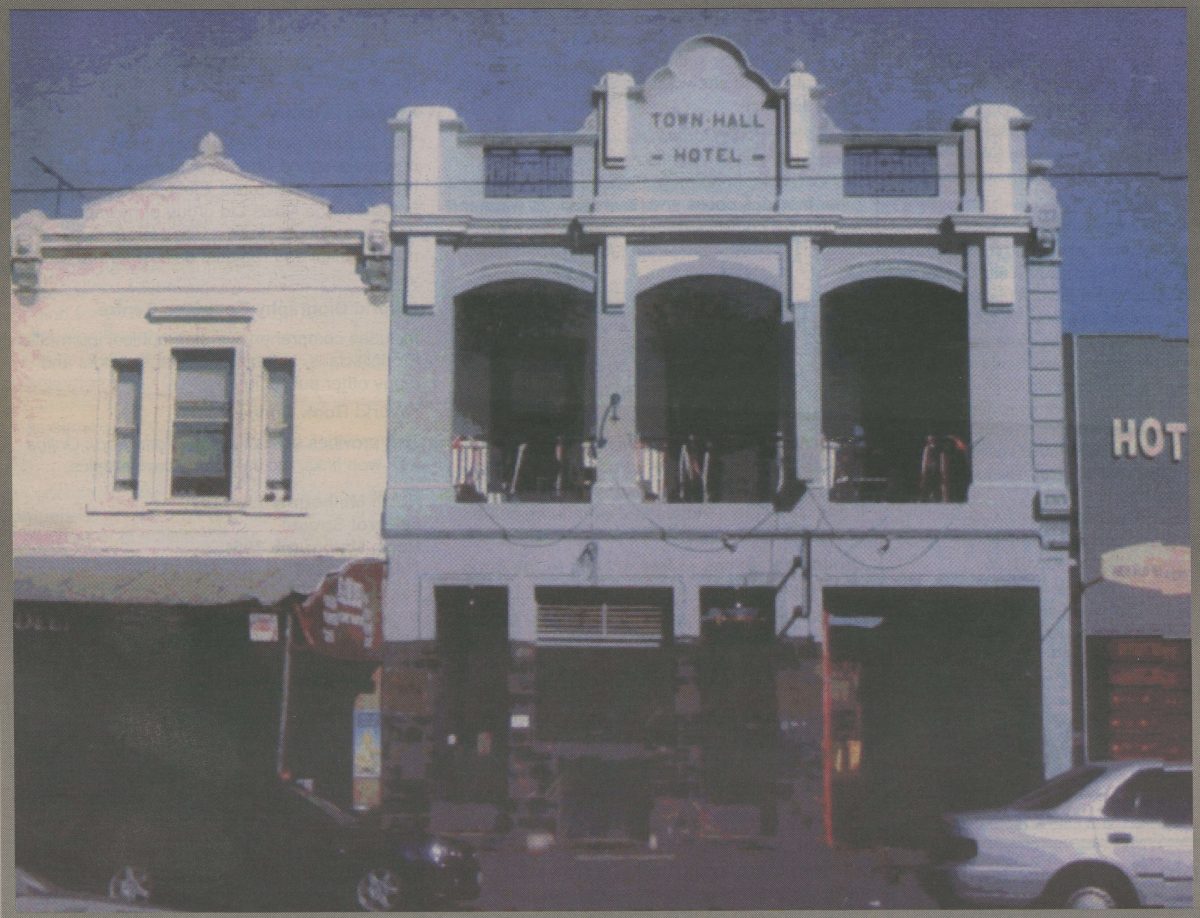 A pub that won’t say die.

The Town Hall Hotel was ordered to close its doors in 1904 as a result of a Liquor Licensing Board assessment of all the pubs in North Melbourne. Somehow, and there is no record of how this occurred, the pub survived and today it is one of the area’s most popular drinking spots.

Thomas Smith, a storekeeper living at 21 Errol Street, applied for a licence so that he could make his home into a hotel. The licence was granted and the hotel opened on 31 August 1872, with the name the Errol Hotel. It was a brick building with 10 rooms. As was the case with many North Melbourne hotels, it had many changes of owner, and in 1873 it was owned by Laetita Quinlan women licensees were particularly common at this time. Another owner of the hotel this time in the 1950’s was Lou Richards, the well-known footballer.

The change of name to the Town Hall Hotel in 1874 was probably a reflection of the proprietor’s eagerness to keep up with the times. Although there had been talk in that year of replacing the existing brick town hall with something more lavish and imposing, the new building did not actually happen until 1876.

One of the reasons why the Town Hall Hotel was ordered to close was its proximity to many others. Indeed when it was opened in 1872 there were 14 pubs within easy staggering distance. The map shows the location of the nearby hotels, listing those closed before 1902, those which were ordered to close and those allowed to remain.

Two of these hotels, the Butchers Arms and the Empire, had closed by 1902, the year in which local residents voted on the number of pubs that they wished to be retained in the area (the Local Option Poll). The local community voted for 37 pubs to be closed and for 20 to remain.

The Licensing Board conducted a survey of the 57 hotels in the Flemington Road Division and decided, using criteria such as standards of cleanliness and how the pub was run, as well as proximity to other pubs, which should be closed.

Compensation was paid to those that went out of business. Of the 14 pubs clustered around Errol Street, the board recommended that only the Limerick Arms, the Court House, the Eldorado, the George and the Three Crowns (which was anyway in a different licensing area) should remain.

There were alterations to the Town Hall Hotel in 1942 and 1963, but the details of these are not known. In 1982 Alf and Gianna Quattrocchi leased the hotel from Carlton and United Breweries and Gianna worked there for about two years. Later Alf bought the freehold from the brewery but sold it shortly afterwards.

During the years the Quattrocchis owned the pub they made substantial alterations.

According to Gianna, the end of the ‘six o’clock swill’ meant that pubs had to change their style and their clientele if they were to survive. The front of the building housed a bottle shop, which was removed, and the back was completely remodelled. They built a lounge garden and installed a barbecue where customers could cook their own meat. They also introduced a more upmarket cuisine instead of the usual counter meals.

The pub declined somewhat over more recent years, but has undergone another resurgence under the current publican, Jonathan Collins, who has ‘gentrified’ the hotel no more pokies and topless waitresses.

He believes that the hotel has become more of a club, attracting people in the 20 to 50 age range through its balance of good old fashioned music” and talented new performers. A band plays every other night until 1.00am. He is proud that many of the young performers that he has promoted have gone on to make a name for themselves.

Sumo wrestling on Wednesday nights has also become popular, where teams of five people enter a sweep of each of the sumo matches on TV. His efforts have been rewarded by entries in the guides published by Mietta’s, The Age (Good Bars Guide and Cheap Eats Guide) and the Lonely Planet Food Guide to Melbourne.

And perhaps the best recommendation of all the neighbours have no complaints and say that it is well run.