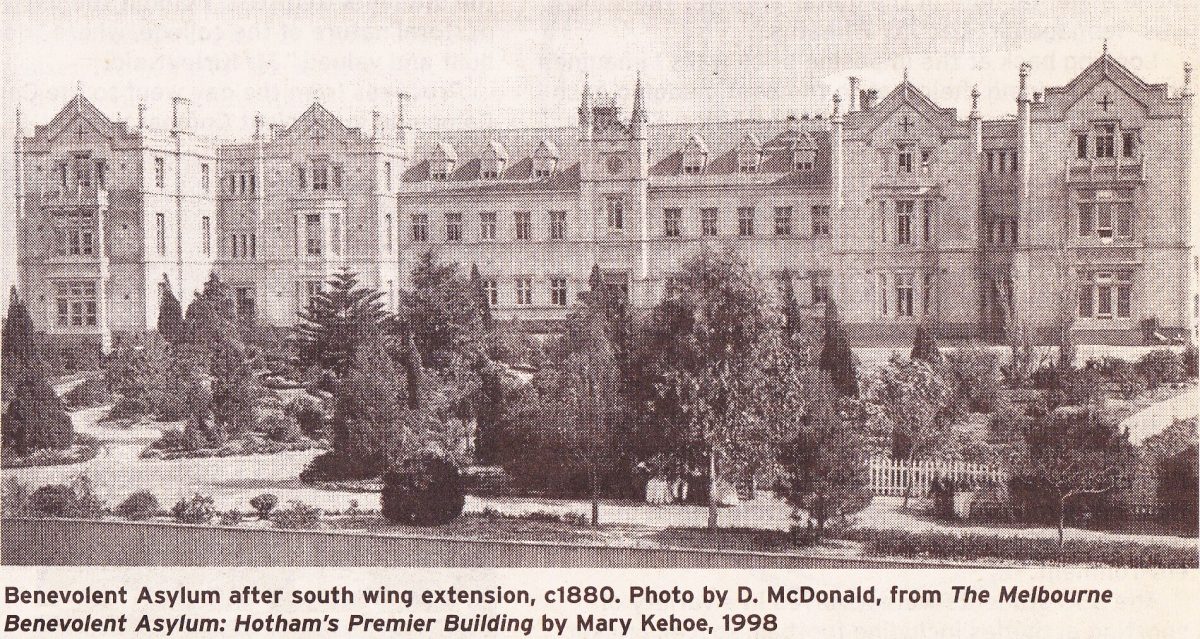 Mary Kehoe’s interest in local history research began with the stories of the Benevolent Asylum, which had been a landmark on Melbourne’s western skyline for over 60 years from the laying of its foundation stone in 1850 until its demolition in 1911.

The asylum boundaries were on Elm, Abbotsford, Miller and Curzon streets, and the huge main building sat astride the hilltop, interrupting the alignment of Victoria Street, which now runs continuously though the old Asylum Estate.

When the gold rush exploded on the colony in the early 1850s, the rush of people to the goldfields swelled the population in North Melbourne, as it became one of the supply points for prospective gold seekers travelling northwards out of Melbourne along Mount Alexander Road.

North Melbourne developed as a working class area in the late 1800s as more workers moved there in proximity to the industries associated with the railways, the markets, the sale yards and the wharves.

Noble stone buildings were erected, for city administration, and churches. Around 1870, the small creek that flowed from Royal Park down to the area now known as Harris Street was encased in a bluestone drain. This creek bed had originally been set aside for parkland, but in the 1870s narrow building allotments were laid out and tiny single-fronted weatherboard cottages were erected. This area later became known as Happy Valley.

Mary, together with Lorna Hannan, Janet McCalman, Winsome Roberts and Rae Nicholls, was a foundation member of the Hotham History Project, which was set up in 1995 with the aim of publishing a history of North and West Melbourne. The Hotham History Project is based at the North Melbourne Library, which is very supportive of the group’s activities.

The local history librarian, Heather McKay, is a committee member and provides secretarial assistance. Heather’s reference and research expertise, her enthusiasm for local history and her intimate knowledge of the Local History Collection have been an enormous help to the group and Mary said they would be lost without her interest and support.

The Hotham History Project commemorates the former name for the area, which changed its name from Hotham to North Melbourne in 1887.

So far, three short books in the continuing series The Annals of Hotham have been published. In 1998 the Hotham History Project published the first of the series, Mary’s history of the Benevolent Asylum, followed by Faithful Friends: A History of Animal Welfare in North Melbourne by Felicity Jack in 2000 and Molesworth Street A North Melbourne Neighbourhood, 1840-19 o s by Winsome Roberts in 2002. Also in 2002, the Hotham History Project co-published a much larger history with the San Marco in Lamis Club. Sammarchesi: Memories of Migration from San Marco in Lamis by Lou Soccio is a history of migration from a small town in southern Italy to Victoria.

The group is hoping to publish The Annals of Hotham volume 4, the history of the landmark house on the corner of Brougham and Dryburgh streets, within the next few months (see facing page).

The Hotham History Project has also conducted a series of historic walks around North Melbourne — a historic pub crawl, a walk exploring 19th century Errol Street and its surrounds and a walk beating the bounds of St Michael’s Parish. In 2003 the Project produced a printed version of the pub walk, which included a map showing the location of some 79 hotels that once existed in North Melbourne.

The pubs were drastically reduced in number following the Local Option Poll that culled the pubs in the early 1900s. They were clustered around the exit route to the goldfields, along Howard Street and Flemington Road. Amongst those in Howard Street was the North Star, which moved to the corner of Provost and Abbotsford streets in 1859 and was demolished last year. Amongst those retained is the British Hotel on the corner of Arden and Abbotsford, which is at present being converted to apartments.

The 2004 oral history project, Hotham Voices, will explore the history of ordinary people’s lives through their own memories. The series will begin with Evelyn’s Story, the late Evelyn Duffy’s written account of her life, much of which was spent in North Melbourne. Evelyn loved dancing and married her childhood dancing partner, Jack Duffy.

The Hotham History Project has a time-consuming task ahead to reach a publication date sometime in the next two years. History research is time-consuming, especially with oral history, as the interviews must be transcribed and then the details have to be researched to obtain support from historical facts. It is hoped the Project will have the advice and guidance of Dr Janet McCalman from Melbourne University. The Hotham History Project welcomes all those interested in becoming involved, as either a transcriber, a researcher, a writer or a general enthusiast.

A proposed project for 2005 will be to celebrate the centenary of the incorporation of North Melbourne into the City of Melbourne. Due to its considerable growth during the gold rush, Hotham became a separate municipality in 1859, with an elected mayor and councillors. It was administrated as a separate city until the incorporation in 1905. The present North Melbourne Town Hall was erected in 1876.

As a member of the Hotham History Project, Mary Kehoe has assisted in the recollection of the early years of North Melbourne, with her interest and professional approach to heritage and historical preservation. Her reference librarian background is eminently suited to the task.

Added to her other interests, Mary is one of the North and West Melbourne Association’s representatives on the City of Melbourne’s Heritage Advisory Committee. In this capacity she is concerned to protect the Level 1 Streetscape of the Errol Street shopping precinct. The street has enormous appeal to restaurants that are attracted by the historic character but wish to provide seating on pavements under the wide verandahs along both sides of the shopping precinct between Queensberry and Victoria streets. There has also been pressure to alter the 19th and early 20th century shopfronts that contribute to the street’s special ambience and heritage significance.

Parts of the streetscape, such as the chemist shopfronts, date from 1854. Charles Ager Atkins founded the chemist’s after he left England at age 25, bound for the Victorian goldfields, became injured on board ship and settled in North Melbourne. He concocted and became famous for a cure for nervousness, neuralgia and influenza in his Atkins’ Quinine Wine Tonic. His chemist shop is still a chemist’s to this day.

Mary has other historically related memberships in the Royal Historical Society of Victoria and the National Trust of Australia (Victoria). She is also a member of the Royal Park Protection Group and the North and West Melbourne Association, which support residents’ views on local redevelopment plans and environmental issues.

In September 2003 the Royal Park Protection Group nominated the Royal Park Hospital for inclusion on the State Heritage Register. The application was rejected and it was due largely to Mary’s expert, scholarly submissions that the group won its appeal and the Heritage Council overturned the original decision. The citizens of Melbourne owe a debt of gratitude to Mary for helping to save — at least temporarily some of our finest Federation buildings from the developers’ bulldozers.

In December 2003 Mary Kehoe was the recipient of the Phonse Tobin Memorial Award from the Rotary Club of Melbourne North for her contribution to the fostering of local history. 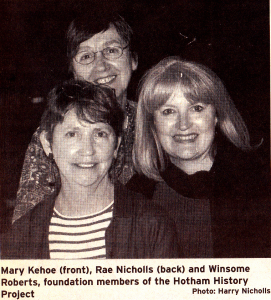