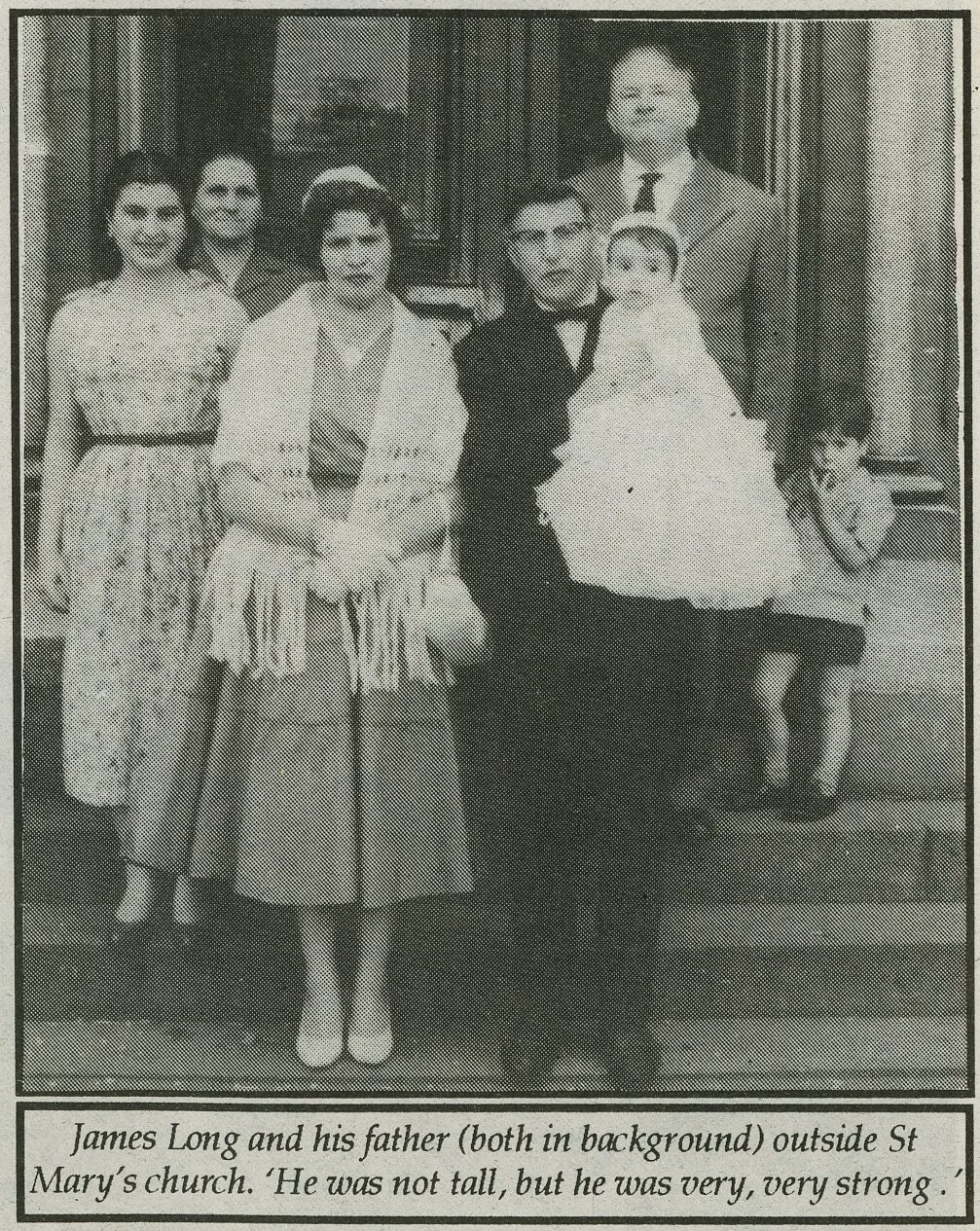 At a time when Melbourne was still part of the extensive colony of New South Wales, an Irish family of free settlers by the name of Long arrived in North Melbourne and settled among its open, tree-lined boulevards. Dan Austin spoke with James Anthony Long, descendant of that family.

When I arrived at the Elm Street house, the door was wide open and welcoming, revealing a well-ordered cottage packed to the rafters with books, photo albums and an extensive collection of wine. As with many hidden stories, a wealth of local history awaited inside its walls.

In 1899, James ‘Tony’ Long’s father (also named James) was born into a house on Stanley Street. Though the house has since been replaced, it is best remembered for its proximity to the train line, whose donations of soot so continually spoilt the washing that his mother initiated a move to Howard Street.

Half a century later, still at Howard Street, his wife Teresa gave birth to a son, the third of seven children. James Long senior was 54 years old.

In the fifties, North Melbourne housed more people and less industry than it does today. James junior remembers the Howard Street house as a hive of activity, given life by the extraordinary energy of his father. He referred more than once to his father as a man with little money, who was ‘extremely rich in other ways’.

James Long senior abhorred pretension. Unable to attend university due to financial restrictions, he set about teaching himself. He was extremely well read, speaking six languages: Russian, French, Spanish, German, Italian and English. He quoted poetry and opera scores in German and Italian, taught himself the intricacies of law and took a keen interest in politics. He worked as a printer, professional wrestler (working as assistant — or second – to the then famous American wrestler Chief Little Wolf) and, during the depression years, as a ‘catcher’ on the trapeze with a travelling circus.

Long is perhaps best remembered however, for his community work. His benevolence brought a constant stream of people to his door. ‘If anybody wanted advice within the community they came to my father. His door was always open.’ He supported the largely Italian migrant community in matters of law, interpretation, housing, tax and voting procedures.

The police trusted his advice as an interpreter, occasionally calling on him for assistance; ‘I remember one time there was a knock on the door at about two or three in the morning. A group of Italian men came to see my father because one of their friends had been arrested. My father went to bail him out.’

Long would charge whatever each person could afford. James believed that if his father did not have a large family to support, he would probably have given his time for nothing.

Ingrained in these benevolent practices was a strong sense of life political. A grass roots socialist in a time of great political activity, he learnt Russian from refugees from the Bolshevik revolution, and was a staunch Labour party advocate. His own father campaigned against the shilling per vote rule during the first World War and, as a conscientious objector, fought conscription. As a founding member of the North Melbourne Branch of the Labour Party, he actively sought postal votes and handed out ‘ how to vote’ cards at local elections for over 50 years. Among his friends in the party were Arthur Calwell (both attended school together at St. Mary’s as early as 1906) and state member Arthur Cleary.

His other great public love was for the North Melbourne Football Club. James interrupted our conversation to take down a framed picture of John Dugdale taking a soaring mark in 1962 at the Junction Oval. He was eight at the time and he and his father were at the game. ‘He followed North in the Association and then into the League. We’re talking about the mid-nineteen twenties. My father’s name is on an honour board at the social club in Fogarty Street. There are one hundred names — the original foundation members who saw the club enter into the VFL from the Association League. He was a continuous life member.’

James vividly remembers the time when the club was considering moving from Arden. Street to Coburg in the sixties `He had a wonderful speaking voice. It was standing room only in the Town Hall when the vote was taken, with an irate crowd standing up to the committee who had decided against the best interests of the members to go to Coburg. My father voiced the membership opinion clearly and concisely and was given a standing ovation. I was only eleven or twelve at the time and I was just amazed that without a microphone, speaking from the floor, how his voice echoed out. He was just a wonderful speaker, an orator I believe. He lost his calling, he never pursued any-thing political and he should have. He would have been better than any of them.’

James recalls those years in the fifties and early sixties as a great time locally. His father had one of the first television sets in the neighbourhood, and the lounge room would fill up on weekends with neighbours dropping by to watch. The family also had an FJ Holden, which his father lent out to the boys next door to take their girlfriends for a drive. During the summer, the Italian neighbourhood boiled water in forty-four-gallon drums for tomato sauce preserving. The sauce making was always a festival time, its wonderful smell drifting across the suburb.

The sixties brought other change, however, in the form of compulsory acquisition’; legislation aimed at procuring public land for housing. The word ‘demolition’ became synonymous with depression as whole areas of land were re-zoned and acquired by the Housing Commission. In many cases the land was then sold to estate agents for healthy profits.

Factory owners and real estate prospectors bought up much of the property, and in many cases, tenants were forced out on the street. `We would open up our back door and whole families would be standing there. A year or two later they would all be gone. ‘One by one communities such as those existing near Haines and Abbotsford Street and the area known as ‘Happy Valley’ disappeared.

`The demolitions hit us very hard. They broke whole communities. The house next door to us for instance one of the vendors from the Victoria Market — bought it and used it to stack his fruit boxes. They were speculators basically, speculators. It tore my father’ s heart out. He became so angry but what could we do?’ Much of the community loved by the Longs vanished as people moved further out into the suburbs. ‘If anyone knows just what uncontrolled development does, to communities, does to families,’ says James, ‘I know firsthand’.

Here James’ own story begins to take over. His parents broke up and James senior moved into a house on Curzon Street. For a variety of reasons James moved away from his father to Flemington, though over the years he would visit, or through his work drive trams through North Melbourne just about every day.

As a young man, James did not understand why someone like his father did not try to aim higher; ‘I didn’t understand at the time why he would want to live here in North Melbourne. But I have come to understand. This was his world. In my later years I see his perception of life and its many levels. He was a person who had the community at heart.’

The move back to North Melbourne has reinforced something of the legacy his father helped shape and continues the strong family link in North Melbourne. The influence of James Long can perhaps best be measured by the influence he has had on a son now endeavouring to continue some of the work his father started,

`I had toyed with the idea [of moving back] for a long time, but economic circumstances wouldn’t allow it. Now Entering middle age I’m starting to go about things in a similar way as he did, joining local groups, trying to make some sort of difference I guess’ .