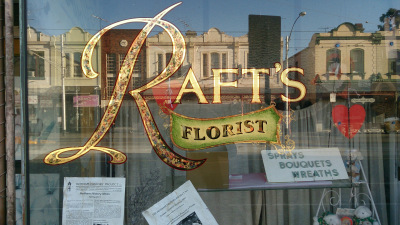 Victoria Street is one of my favourite suburban streets. It runs from west to east across the top of the city, forming the southern boundary first of North Melbourne and then Carlton, as far as Nicholson Street, where it becomes Victoria Parade. A walk along this street reveals diverse architecture, intriguing ghost signs and a few good street-art sites.

I picked up my walk at the western end of Victoria Street, close to Guest’s biscuit factory, just outside the old Mulcahy’s pub, a Moderne hotel built in the 1920s which has now been converted into apartments.

North Melbourne was the most densely populated part of the city during the boom years of the 1880s. Many thousands of houses were built across the suburbs at that time, and North Melbourne certainly got its share, many still standing. They were the years of the great property bubble, which led to Melbourne’s economic crash of the early 1890s.

As you head up the hill, there are terraces of small Victorian cottages and a couple of nice bluestone houses. These days the city is experiencing a new property boom and the people of North Melbourne are making their feelings known about it.

These days Loco Hall is used as a reception centre (with the cutely 1970s name Candelles) and is also the home of the Panarcadian Association. Originally, though, it was the headquarters of the Locomotive Engine Drivers and Firemen’s Association, later the Australian Federated Union of Locomotive Engineers.

In contrast, a little further up close to the Errol Street intersection — is a delightful small Art Deco building with ornamental brickwork and numerals. There may be more spectacular examples of Deco in Melbourne but I always smile when I pass this one. It’s like a stylish flapper surrounded by staid Victorian ladies.

Almost opposite is the poignant window display of Raft’s, the former florist, with its beautiful gold signage and long-dead flower arrangements. The window is like an artistic installation on the theme of mortality, the references to wreaths now sadly ironic.

At 442 there’s an impressive example of an up-market Victorian terrace with oceans of decorative cast iron. It’s reminiscent of some of the mansions I saw a few weeks ago walking through Essendon and Moonee Ponds, but there isn’t a lot of this sort of thing closer to the city centre. Much of it was destroyed in the mid-20th century.

In contrast, over the road is a small cafe that is not giving itself any airs and graces. In an era of hype and spin, here’s a place that tells it like it is. You want five stars, go somewhere else.

Now we enter a really good part of Victoria Street for the urban signage spotter, where ghost signs come thick and fast. I’m very fond of Sergio the hairstylist’s shop at No. 315. As the years pass the lettering has gradually fallen off but the name of Sergio is still there, with its mismatched `G’. Does anyone remember Sergio, or one of his haircuts? The place is now a bar.

A little further down at No. 293-295 is a Victorian shop with ghost signs for Wertheim (on the left), The Herald and The Age. Hugo Wertheim was a German migrant to Australia in the late 19th century, an importer of sewing machines and other mechanical devices, and the first maker of pianos in Victoria in the early 20th. Unfortunately, the words under the Wertheim name are too faded to make out.

No such problems next door at No. 287, where the Hennessy brothers’ signage for their bakery is as clear as the day it was put there.

By now, as we cross Chetwynd Street, we are on quite elevated land – the street has climbed a fair distance from where we started. What do you find on elevated land? A church, obviously — St Mary Star of the Sea Catholic church. Maybe the Hennessys used to attend, or Canizzoro the boot repairer? In more recent times, I have a buddy who has been known to use the church car park as a handy spot when he goes to the market. But you didn’t hear it from me.

We’ve now reached Victoria Street’s most famous landmark, Vic Market, which really deserves a story all to itself but has been much written about, so I am going to skirt past it this time. It’s enough to observe that the long covered, verandas are an excellent feature. Much of this sort of thing was destroyed in Melbourne from the 1950s onwards.

At the point where Victoria Street crosses Elizabeth Street, pause for a moment to get an instant view of the rampant construction of apartment blocks going on in this part of the city. Most of those towers have gone up over the last few months, and there are many more to come.