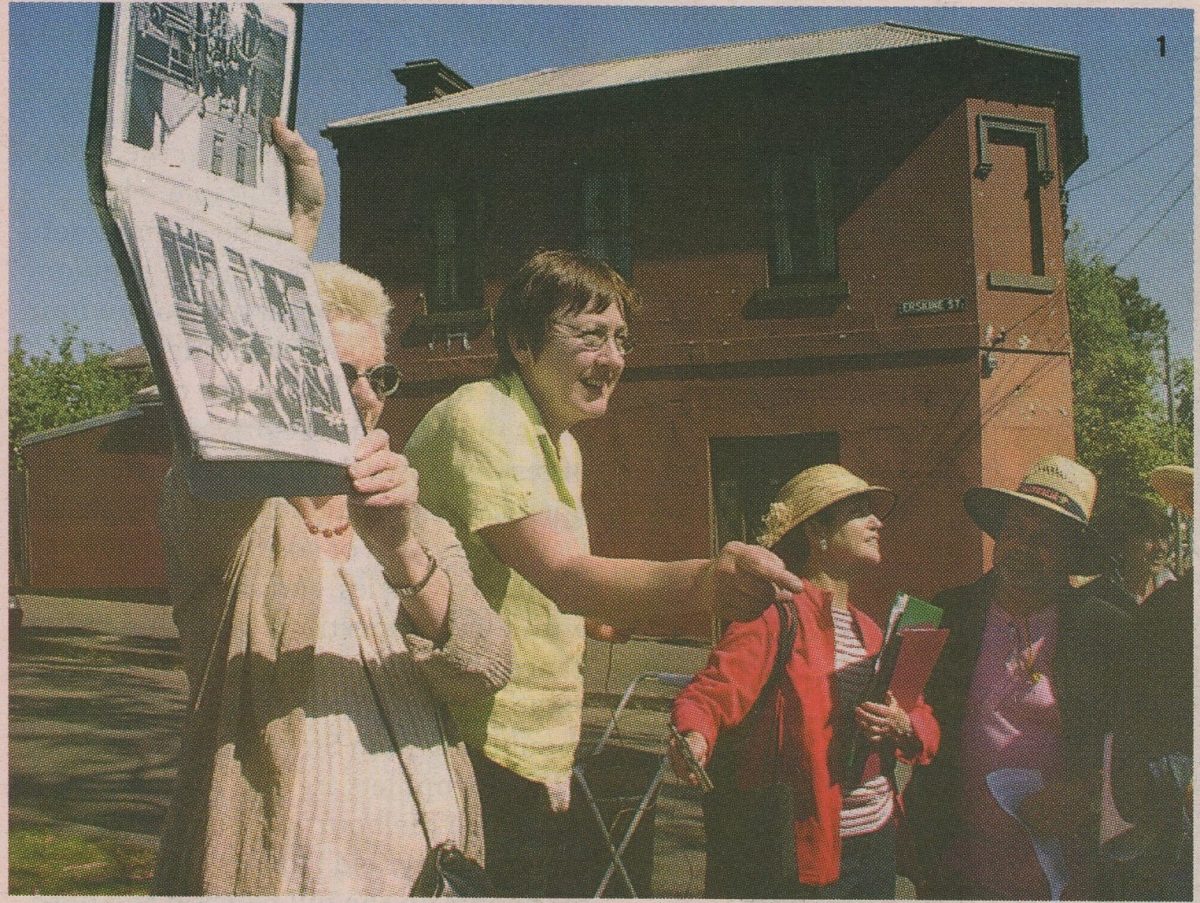 The story of the first hundred years of St Michael’s parish covers a lot of North Melbourne’s history, which the Hotham History Project celebrated on 8 November with a walk around the parish. We took in three interesting churches.

The first was St Michael’s, where the foundation stone explains, in Latin, that it was laid by Thomas Josephus, who was in fact Archbishop Can, the second Archbishop of Melbourne.

Melbourne’s first three Catholic archbishops were all Irish born and they spanned more than a century in charge of the Catholic church in Melbourne. A lot of building went on in that time and St Michael’s, true to popular belief, went for the top of the hill. If you stand back along Dryburgh Street and look up, you can still see its silhouette against the skyline. The use of Latin on the stone is easy to explain: Latin was the language used in the Catholic church at the time and indeed for some 50 or so more years.

The second church was Saints Peter and Paul, which is on the corner of Dryburgh and Canning streets. It was built by and caters for the Ukrainian Catholic community in Melbourne. The sign outside is in Ukrainian. Its blue dome is clearly visible across North Melbourne and the church draws big crowds to many of its ceremonies. Locals notice that the church-goers follow the practices of Eastern Christianity and celebrate Easter at the same time as churches such as the Greek church. The language used there has traditionally been Ukrainian but nowadays some ceremonies are held in English.

The third church was St Alban’s, the Anglican church which has held its own in Melrose Street since the early part of the 20th century. This foundation stone is in English but all is not as it seems. The stone was originally laid in Parkville and later transferred here. The church in Parkville did not have the same name but the stone carries no name and so fits in quite easily.

The walk also took in the sites of St Michael’s School. The first St Michael’s was opposite the baths, where a block of flats now stands. We were lucky enough to have on our walk a resident whose mother had attended the school and who had a photograph of her and her class. The second St Michael’s School was on its present site in Brougham Street and a number of other people who came on the walk had gone to school there. They included Tess Demediuk and her sisters, members of the Wynn family, whose home in Canning Street has been occupied by the family for four generations, and Rae Nicholls, who grew up in Brougham Street.

The Wynn sisters and Rae (now Nicholls but once Quinn) were able to give us many details of life in the area over the last few decades and an engaging sense of the community that it generated.

The removal of many early timber cottages that were replaced by Housing Commission flats and private apartment blocks did much to change the life and look of North Melbourne but some of the earlier buildings survive and conjure up memories of times past: a house in Brougham Street that was once a police station, the homes of past elocution and dancing teachers and the `bougainvillea house’ — a grand building in Dryburgh Street that was built by Robert Langford, a one-time mayor of North Melbourne. Langford’s guests feasted on the oysters and luxuries that his life in Melbourne afforded, as we were told by Guy Murphy, who has researched the house in detail and is finishing a book about it to be published during the next few months.

Other places that we saw have become memorable because of who lived there: the ‘red’ doctor, W. Maloney, one of our first Labor federal representatives, who lived as a boy in Dryburgh Street; across the road from Maloney’s, the Gidneys, who made their money with horses in India; and over in Shiel Street, a house built by the early teacher Albert Mattingley for his mother, who had been a teacher in the district before him.

The creek, the blue lagoon and even the gasometer have gone but it is still said that Burke and Wills walked down Shiel Street on their way to Royal Park and that the wild white man William Buckley made his way along what was to become Shiel Street on his way from Queenscliff to Sorrento.

Stories from Hotham Hill abound, and the 50 St Michael’s walkers got quite a strong sense of the stories that will one day be told. If you are interested in the history of the area and want to join one of our projects or start one of your own, contact the Hotham History Project at the North Melbourne Library, 66 Errol Street, telephone 9297 3280.