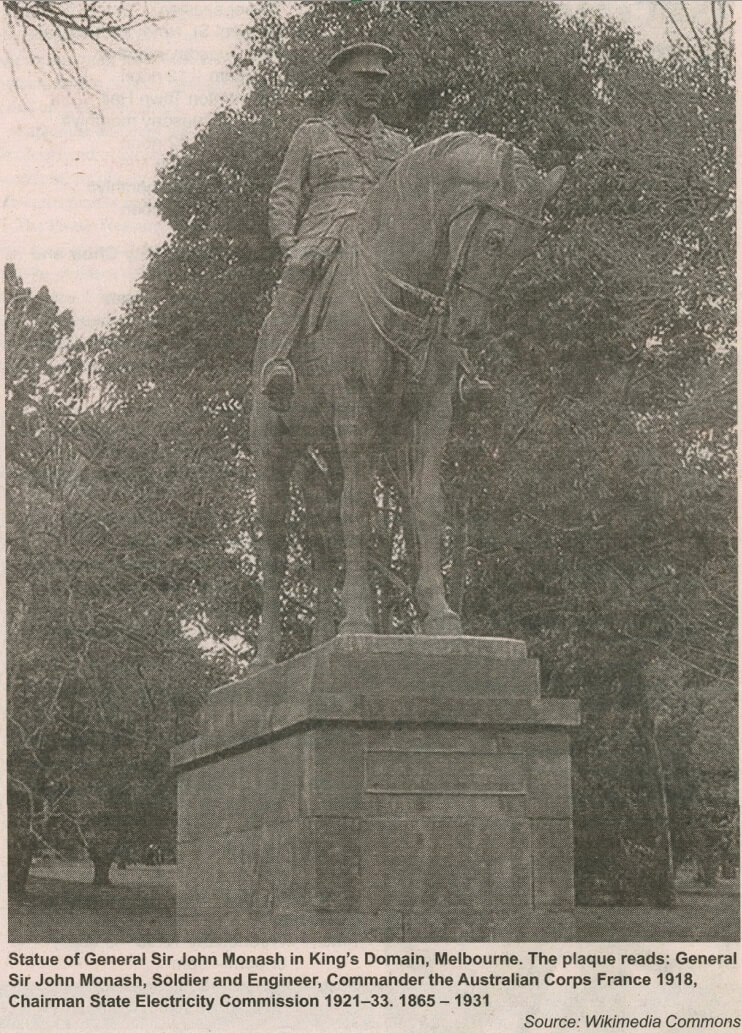 For many of us certainly for me John Monash’s fame as a soldier has eclipsed his record as an engineer and administrator. Monash in fact combined army work with private engineering, and by the time Australia was involved in the First World War he already had a substantial reputation in engineering.

Having been born in West Melbourne and moved during childhood to Jerilderie, John Monash returned to Melbourne to enrol at Scotch College. His sisters went to Presbyterian Ladies College, They had the advantage that their mother was musically accomplished. By the age of five John was proficient on the piano.

He did well at Scotch, then an inner-Melbourne school on Eastern Hill. He was equal dux in 1881, took first prize with an essay on Macbeth, won the Mathematics. Exhibition and set off for university.

Given this record, Monash’s early years at the University of Melbourne were to say the least uneven. He failed his first year, perhaps because he had developed many interests and had spent a lot of time during that year reading other than course work at the Public Library. During this period he thought of becoming a journalist.

In the next year he was more studious, but was also active in student affairs, co-founder of the Melbourne University Student Union and organiser of various debates and concerts on campus.

The bridge is named after the then Prince of Wales, who would be Australia’s head of state from 1901 to 1910 as King Edward VII of England. The building of the bridge began in 1886. There was some urgency. The project had to come in on time because Melbourne was to be the venue for the 1888 International Exhibition.

This latest bridge (its predecessors were a punt, an 1845 bridge of pile-and-timber and an 1850 successor of basalt and granite) was inspired by London’s Blackfriars Bridge and designed by Percy Grainger’s father.

The bridge was opened on 4 October 1888. It is highly decorated with mouldings along the top and piers and wing walls of bluestone quarried in Footscray. The builder was David Munro. The municipal councils that had contributed to the costs of building are said to have had their coats of arms on the bridge, but when I last crossed the bridge I saw only repeated City of Melbourne insignia.

Once the bridge was built, Monash had earned his stripes and was next in charge of work on the Outer Circle eastern suburban railway line. This line was meant to take steam trains from Gippsland through the eastern suburbs corresponding roughly to the present city of Boroondara, but between its conception and its construction the direct route to Flinders Street was authorised and the line served only to enrich land speculators.

Among these speculators was James Munro, temperance warrior, member for North Melbourne and soon to be premier of the colony. Apparently Monash’s administrative and managerial skills were racing ahead and, in three years of concentrated work, he brought the job in on time, completing it in 1891.

Though Monash’s reputation grew with this success, the line itself was a white elephant. Within six years it was progressively closed. A section between Ashburton and Deepdene was reopened to take a steam passenger train nick-named the Deepdene Dasher. Part of the line remains in the present suburban network. The rest has been either demolished or preserved in the form of the Outer Circle Trail for walkers and cyclists.

In this period Monash indulged in several romantic affairs, one almost disastrous, and married, in 1891, a young woman, Hannah Victoria Moss, with whom he had a daughter named Bertha. His marriage was as stormy as his other affairs. He completed his erratic but substantial university education in 1895 with degrees in engineering, arts and law.

By this time Monash was already combining his engineering with soldiering. Having begun in the University of Melbourne company he moved to the North Melbourne Battery, whose principal task seemed to be the defence of Hobson’s Bay. He became an expert on military hardware and by April 1897 was a major in command of the battery. The absence of invaders, however, left time for his engineering business.

Monash’s engineering career had been set back in the Depression of the 1890s, but late in the decade the business he had formed with a friend, J.T. Noble Anderson, acquired the Victorian patent rights for Monier reinforced concrete construction.

Monash had already built some bridges (including the Flemington Road one) and now he took to reinforced concrete bridges as well as concrete pipe manufacturing, this time with partners David Mitchell and John Gibson.

The-bridge building went well until one (in the Bendigo area) collapsed and had to be rebuilt at the company’s expense. Further trouble with contracts mined them. Anderson left the business but over the next decade, with control over concrete patents and construction, Monash became quite wealthy.

By 1913 he had a mansion in Toorak with servants and chauffeur, was teaching at the university and was president of the Victorian Institute of Engineers.

Soon, however, he would have to use his military expertise in a conflict that would change the world’s ideas of warfare.