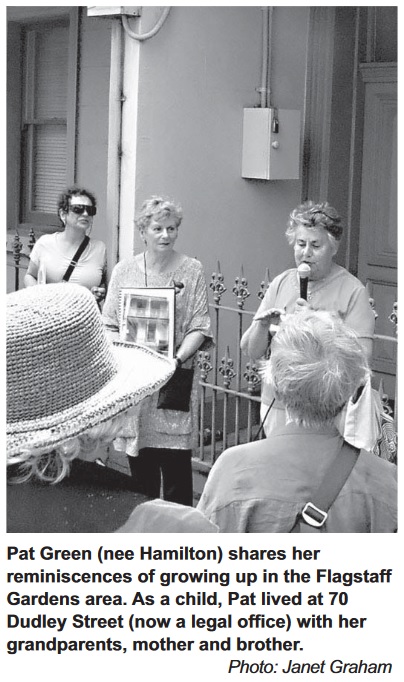 One Saturday last November about 50 Hotham History Project members and friends gathered outside St Mary Star of the Sea to take a nostalgic walk along the streets of West Melbourne.

Many had attended the King Street Primary School in the late 1940s and 1950s when their families lived in the area. Led by Lorraine Siska, who had a trolley-load of photograph albums compiled from books and individual records, the party stopped at houses and sites that held memories for these (former) residents.

In Dudley Street we learned how the kids of yore would catch frogs, tadpoles and yabbies in a pond that covered a large part of the low-lying area of Flagstaff Gardens facing William Street. This pond had been filled in by the mid-1950s and was replaced by a shallow wading pool where the children’s playground is now.

Bill Liddy told the tale of his King Street school friend Nicky Simpson dragging a cornet (of the musical kind) out of the pond in the ‘Flaggies’ when the boys were fishing for yabbies in 1947. Nicky later gave the cornet to Bill’s younger brother, Max, then aged five, in 1952. Could this have been what sparked Bill’s interest in jazz and his later taking up of the trombone?

Rae Nicholls said that when her family, the Quinns, first came to Melbourne from Adelaide they lived in a rented room in Dudley Street. Being very poor, the family’s first Christmas dinner consisted of mussels collected from the nearby docks below Dudley Flats.

Number 25 Walsh Street is a former home of the Barbaro family, who emigrated from Italy in the 1920s. Marie Alafaci, in her biography Savage Cows and Cabbage Leaves, wrote about the lives of her aunt Carmela and her family in West Melbourne coping with the hardships of immigration and the effects of the Great Depression.

“Do you remember how they used to herd sheep down the middle of King Street?” someone asked. A few did, recalling this as an exciting highlight in their young lives.

Participants in the walk remembered their childhood in this area as a happy one, although many — especially girls — had strict limits imposed on them as to how far they could roam beyond their immediate neighbourhood.

Outside the 1867–69 bluestone houses on the corner of Stanley and Chetwynd streets, Ted Meyer described the trek he and his eight siblings used to make from the cramped bedrooms down the stairs and along the lane to the outdoor toilet next to the front of the house. The bluestone kept the houses cool in summer and cold in winter, he said.

The walk ended at the old West Melbourne School No. 1689 in King Street, which is now the Salvation Army’s Flagstaff Crisis Accommodation. Manager Katrina Nguyen and the chaplain, David, welcomed the group and gave us a tour of the facilities. Many of the rooms and architectural features were still familiar to those who had spent so much of their childhood there.

The centre’s staff kindly provided afternoon tea — much appreciated after a two-hour hike in the hot sun.