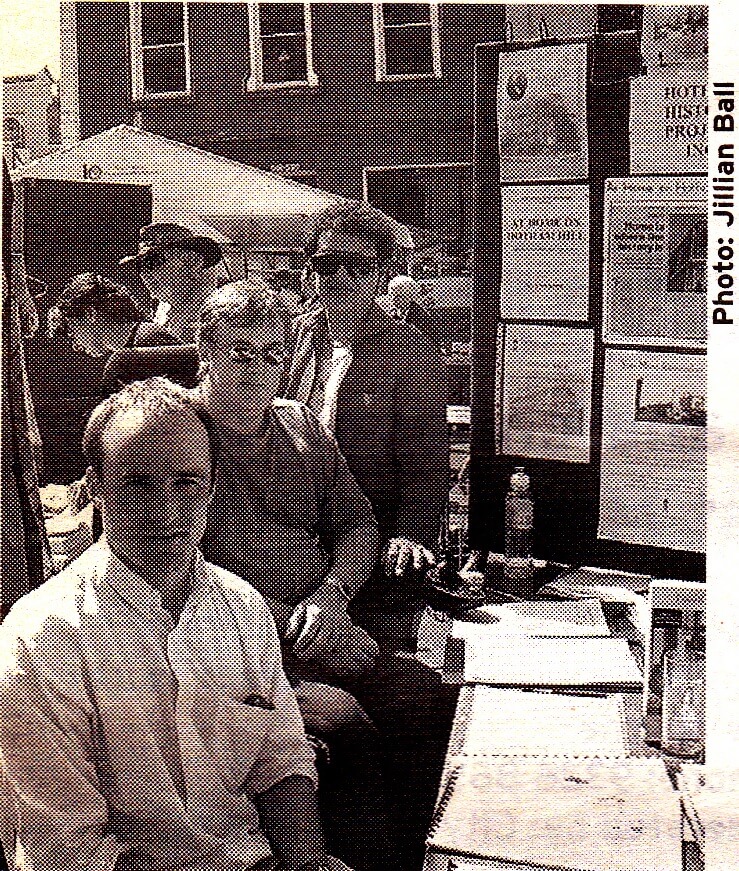 One hundred and twenty years after it was built, the `Bougainvillea House’ on the corner of Curran and Dryburgh streets has been immortalised in a book by Guy Murphy, At Home on Hotham Hill, published by the Hotham History Project.

Guy began researching the history of the house as part of a university assignment in 1996. The book profiles both the house and its original owner, Robert Langford, putting both in their historical context of the economic and physical development of Melbourne in the late 19th century.

The house’s story has been used to examine a series of key themes of late 19th-century Victorian history, including immigration, social mobility and land speculation. There are fascinating descriptions of the typical experiences of immigrants leaving England for Australia in the 1850s, of how colonial society could allow talented individuals of any background to aspire to public office.

The author skilfully builds the narrative by steps as he traces the rise and rise of Langford in his political career, which culminated in his unsuccessfully standing as a parliamentary candidate, for which he campaigned in 1889. A councillor on four municipal councils, he was never voted out of office.

Langford’s wife, Elizabeth, was born on the gold fields of Dunolly near Maryborough. She appears to have been the perfect complement to Robert during his career in public life, a capable and generous hostess.

It is Langford’s property dealings that have left the most conspicuous and enduring mark on North Melbourne, and Guy thinks the chapters describing these may be of most interest to the North Melbourne reader.

Beginning his business career as a market stallholder at the Melbourne fish markets, Langford diversified into land speculation in the Gippsland Lakes and elsewhere during the boom years of the late 1880s and early 1890s.

The ‘Bougainvillea House’, overlooking the intersection of Dryburgh and Curran streets towards Royal Park, was built for Robert Langford and his wife, Elizabeth Miller, in 1884. It was named Milton Hall, probably in reference to a local landmark at Langford’s birthplace of Gravesend in Kent, England. Built for entertaining during Robert’s term as Hotham mayor, the house featured a large drawing room on the upper floor overlooking the park for Langford’s social gatherings.

The Hotham Hill `Bougainvillea House’ was the first of a series of Langford’s mansions. He moved from Hotham to a larger property in Hawthorn in 1887, and to Rosenberg House at Riddells Creek near Romsey in the early 1890s, later becoming mayor there.

Langford was very community-minded. In Romsey and at Hotham he held long tenures on the local schools’ boards of advice. He was a generous patron of the North Melbourne cricket and football clubs. In 1883 he presented a silver cup to the junior cricket clubs for use in competition, known as the Langford Cup.

Guy believes Langford’s greatest disappointments were the absence of children in his marriage, his insolvency in 1895 and his unsuccessful parliamentary candidacy.

The couple’s childlessness led the author to track down the descendants of Robert’s siblings, James, John and Harriet, in search of biographical material. Langford died in 1915 aged sixty-six.

The architecture and physical development of the house are examined in the book. There is a photographic schedule of architectural details, and house plans showing consecutive phases of development. These include the transformation of the building into a boarding house in the 1930s, then back into a single-occupancy residence in 1967. The author discusses the origins and use of building materials, with elements having been imported from England and others manufactured locally.

The appendices include a Langford family tree, a schedule of Robert Langford’s property holdings at the time of his insolvency and a substantial bibliography. The bibliography forms a comprehensive reference list for anyone who has ever wondered about the history of his or her own house and wanted to find out more.