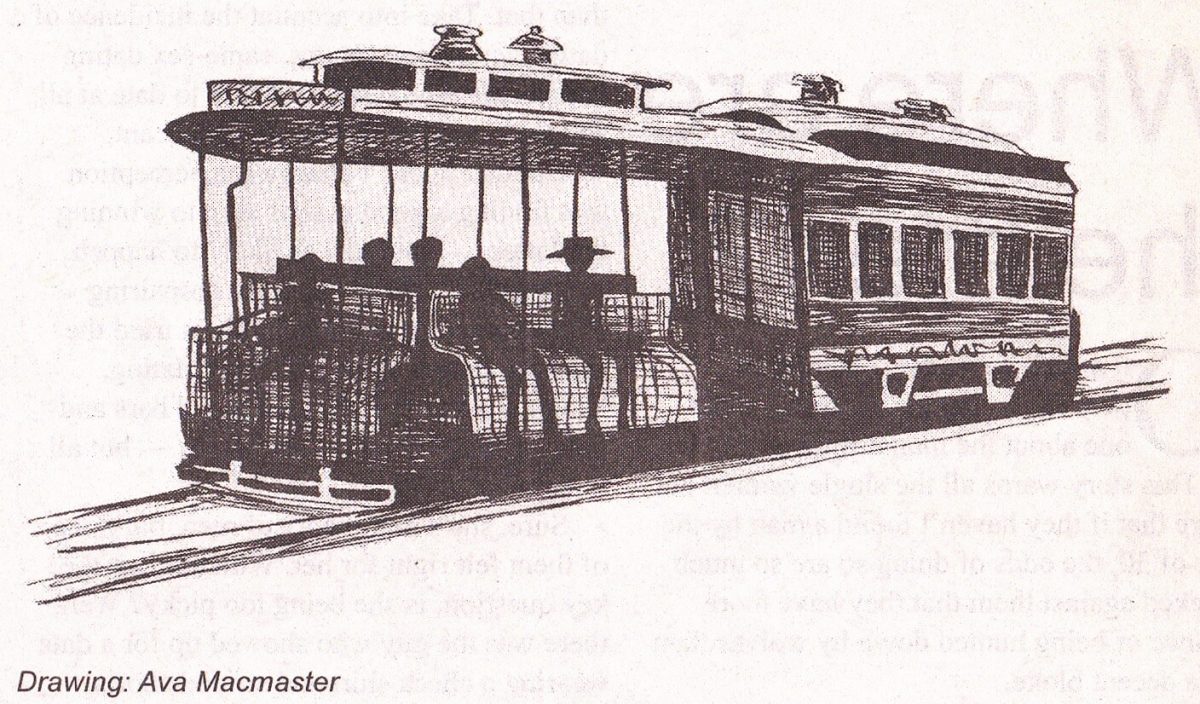 It is now a few years since my Uncle Neville (Clement Neville Govern died. He became my uncle when he married my aunt, Leila Bums. He had left Melbourne years before, but remained the self-appointed family expert on our cable trams. On his annual visits, he delighted in taking us to points of interest related to the story of Melbourne’s cable transport system. If we did not go to an actual spot he would regale us with details of what we would have seen had we gone, but we were often to be found standing outside the former engine house on the corner of Queensberry and Abbotsford streets, or staring down at the asphalt covering the last remaining bits of cable under Abbotsford Street. After Neville died, we realised that we had probably not gone often enough and did not know nearly as much as we should. Recently, however, I found notes I had taken as he talked to us one afternoon. As I had noted at the time, although there were cable trams in Melbourne from as early as 11 November 1885, the North and West Melbourne lines did not open until March 1890. When they were first introduced, the trams travelled at about eight miles per hour. This later increased to some 13 miles per hour, but the West Melbourne line was always a trifle slower than the North line. The early trams were called “trains”. They were carried along by the use of a “grip” that was opened and closed to hold on to a moving cable under the road. The act of attaching the grip to the cable was a “pick up” and opening the grip to let go of the cable was a “throw”. The cable itself was often called the “rope”. The man responsible for all such manoeuvres was the “gripman”. After conductors were removed from Melbourne’s electric trams, Neville was ever ready with details of the system in the good old cable tram days. No possibilities of fare evasion in those days. A conductor who set off from Abbotsford Street had a batch of long, coloured trip slips pinned to his jacket and a punch strapped on over his shoulder. On the punch was a sort of clock face with two hands that moved forward each time it was clicked. Unless my notes are quite wrong, a passenger could pay by producing a ticket or coin, but either way the conductor clipped out a number from the paper trip slip, and the clipped piece was stored inside the punch until the end of the journey. There the combination lock on the punch was opened and the numbers of clicks and clippings reconciled. If a passenger paid a through fare, which involved changing trams, the trip slip (or ticket) had the original conductor’s badge number in big black figures in the top right hand corner. To get a picture of how trams operated in those days, imagine it is 1923 and you are taking a trip into the city on the North Melbourne line. You might walk up to Flemington Bridge (still there and with a railway station named after it) and watch while the “dummy” and “trailer” were pushed out of the car shed, coupled by hand and then drawn together with a hook, links and a turnbuckle device. On getting the signal, the vehicle would be taken out and, after gripping the cable, would be drawn on to the wide stretch of Flemington Road and the journey would begin. As you travelled along, you would see parkland on the left and residences and public houses on the right, and you would stop at Abbotsford Street. The cable would stay gripped while the tram (as it was by then known) took the curve. At a number of points between there and Queensberry Street, passengers would be picked up and set down. Just before arriving at the corner, the gripman would throw the cable that had been in use, and the tram would be brought to a full stop. Now was the moment to pick up a second cable, the one that would draw the tram to the city. This pick-up was done by hand before the tram turned into and travelled down Errol Street. As the tram came close to Victoria Street, the cable was again released, and the vehicle coasted round the corner where the gripman picked the cable up again. Along busy Victoria Street, there were two major stops — one at William Street, where the tram crossed the tracks of the newer electric line, and another at Elizabeth Street. Here there was often a wait for the flag man to signal that the city-bound North Melbourne tram could take a right hand turn into Elizabeth Street. From there on down to Flinders Street there were both North Melbourne and Brunswick trams picking up and setting down passengers. The trams moved slowly enough for agile passengers to get on and off while they were still moving. On the return journey there would often be quite a crowd getting on at the Market. Cable trams ran for about 50 years without much change to their design. Uncle Neville liked to assert that this spoke volumes for the excellence of the original design and workmanship. He often referred to the night peace was declared at the end of World War 1 when there was memorable damage done to trams on both the West Melbourne and North Melbourne routes. Recommended is a visit to the Trams: Moving Pictures exhibition, which will run until August at the Old Treasury Building Museum (20 Spring Street). You can also see a video, “Commuting by Cable”, which includes some of Uncle Neville’s footage. And you can see “The Melbourne Cable Tramway System” on YouTube, including footage Neville took between 1933 and 1939.