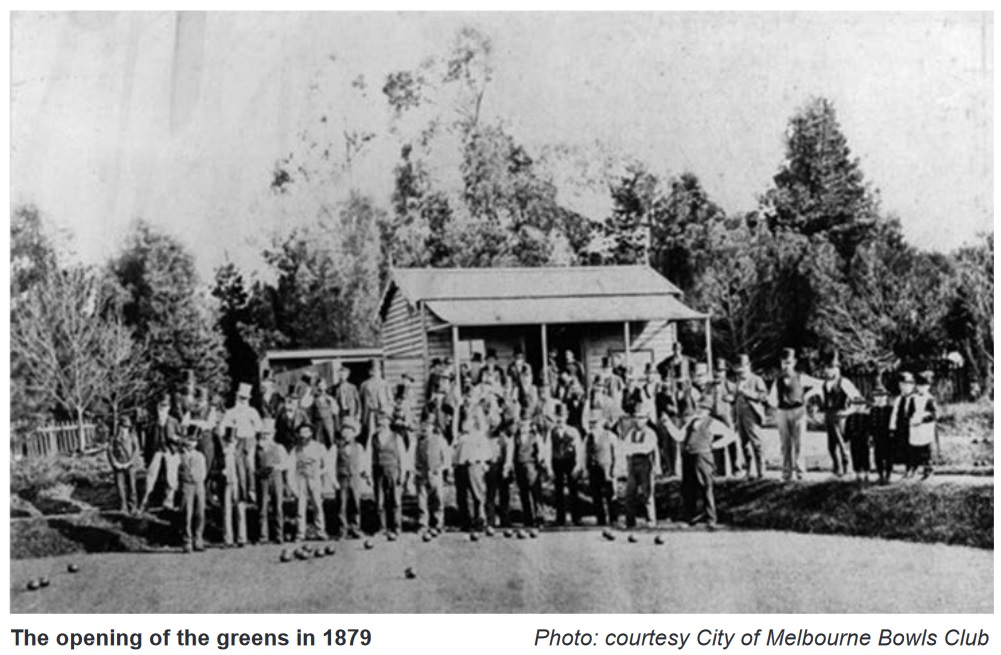 The minute book proclaiming the formation of the West Melbourne Bowling Club, on 18 August 1866, begins with these words:

“At the request of several gentlemen who are desirous of having the Bowling Green of the Sablioniere Hotel Queen Street reserved for their exclusive use on certain days each week, the Proprietor has resolved on establishing the above named Club. The Green will be kept in order and Bowls provided by the Proprietor for the use of the Members.”

The Sablioniere was on the corner of A’Beckett and Queen streets, amidst a piano factory, a steam-engine yard, a small block of terrace flats and open ground.

Most of the “several gentlemen” lived nearby. With two exceptions they were the tradesmen, retailers and professionals who dominated the economic, social and political life of early Melbourne. They were not ‘gentlemen’ as the word was understood then.

The two exceptions were Sir Charles MacMahon, the local MP who became the first president, and William Frederick D’Arcy Irvine, the first treasurer.

The club moved from the Sablioniere to William Street, then in 1879 to the Flagstaff Gardens, where it has occupied four premises including (since 2009) the current building.

There have been famous names among the membership, including Samuel Amess (also the first president of the Victorian Bowling Association when it was formed on 23 July 1880 and mayor of Melbourne in 1869–70), James Dynon (also a city councillor) and Charles Nettleton (renowned photographer of early Melbourne).

There are quirks. At the 1906 AGM members voted to change the name to City Bowling Club. At the same meeting a motion to admit ladies, put by some forward-thinking members, was lost. Ladies were finally admitted in 1967.

To mark its 150-year milestone the club has held several events, produced a range of memorabilia and commissioned a club history.

A members’ dinner on 18 August provided an opportunity to enjoy each other’s company while reflecting on those who came before. A more formal gala on 27 August welcomed guests including those from Bowls Australia, Bowls Victoria and the City of Melbourne.

One of the constant themes throughout its 150 years, confirmed through the research for the club history, is the diverse range of people who have been part of the club and the way in which they have enjoyed being able to meet, play and socialise together.

As was the case in 1866, members today still meet and make friends among people they might never have met elsewhere. New members and visitors are welcome — check the website at www.citybowls.org.