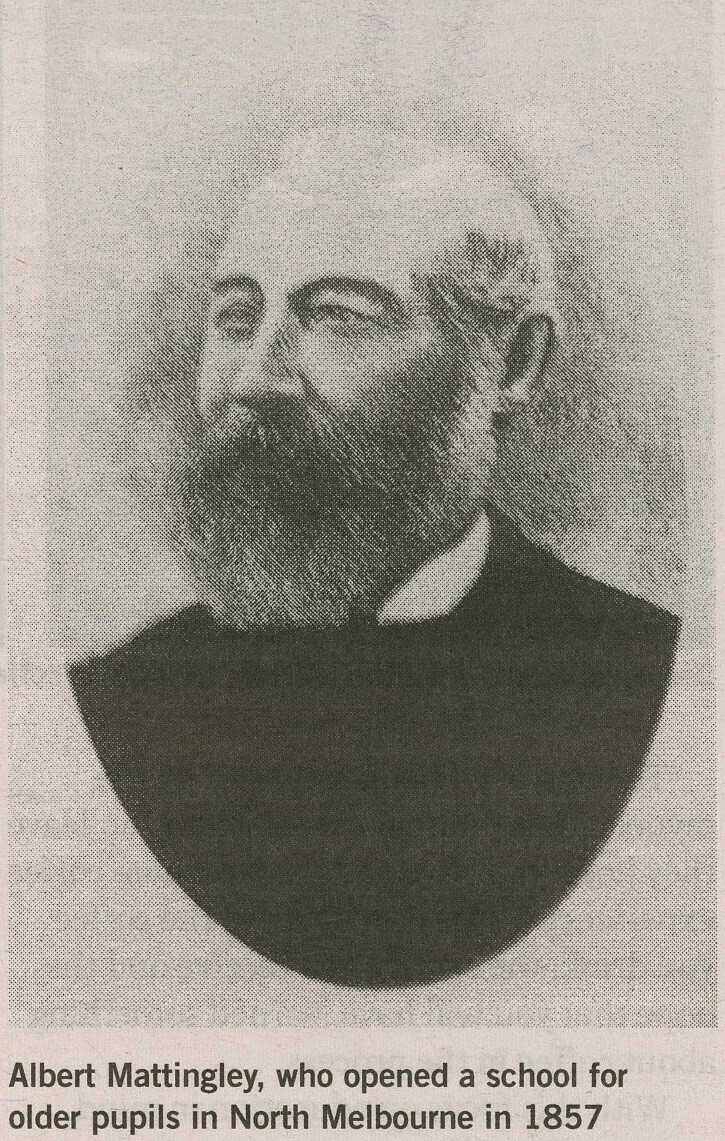 The ‘City of Poonah’, according to a passenger named William Parker Snow in his Voyage to Port Phillip in the City of Poonah, 1852, was a ﬁne ship of 800 tons and built of teak. “She was chartered,” he wrote, “to carry out a number of female Emigrants — ‘distressed needlewomen’ — whom a benevolent Society in England, under the patronage and direction of a well-known member of the legislature, and his estimable lady, had selected for the purpose of thus trying to relieve and improve their condition.”

We have to suppose that at least some of these distressed needlewomen saw themselves as unlikely pioneers in a colony about to burst with gold where kangaroos still bounded down Errol Street in mobs and the indigenous owners conducted corroborees in Royal Park. We might be sure, however, that a family of unassisted migrants from Reading, England, by the name of Mattingley saw themselves as, improvers of the growing society based on Melbourne. In particular, Mrs Elizabeth Mattingley, wife of John, clearly had plans to improve the world.

Like many of the ﬁrst settlers of North Melbourne the Mattingley family lived for the first ﬁve months in a tent they had brought with them on the ship. The tent needed to be, as it apparently was, of marquee size to accommodate husband, wife and their nine children. As soon as land became available, the Mattingleys rented the ﬁrst house to be built in Bendigo Street, off Errol Street on the north side from the town hall (which was not yet there). Not long after they bought property in Errol Street.

Elizabeth Mattingley had been 17 when she married in Reading and was 34 when she arrived in Port Phillip. By the time the family set out on the long voyage, she had had 14 children, of whom nine were still living. Somehow (we can only guess) within a few years she found the time and will to start a school. It was July of 1857.

To begin with, Mrs Mattingley’s school was in two of the rooms in the house where she and the family lived. In the evenings one of the classrooms continued to be used as the family dining room.

The two rooms could hold about 80 pupils. Most of the pupils sat on forms, 10 to a form. Elizabeth was an Anglican, but she ran her school without connections to any church. By contrast, many of the schools that were established at the time were connected to or entirely organised by churches.

Early inspectors’ reports state that in her school in 1858, kids learned times tables by chanting them in unison and that reading was taught with the help of monitor teachers. As time went on, more monitor teachers — young women — were employed and a drawing master and a singing master were found to help compete with other schools. Although schooling was not compulsory, and many children missed out, there was a profusion of privately-owned and church schools. Some came and went like the autumn winds; others, like Mattingley’s, dug in and served very substantial numbers of scholars.

The family was working to a plan. In the following month (August 1857) Albert, her 21—year—old son, set up a companion school for older children.

Albert’s school opened in an iron building owned by his father, John, and rented from him by Albert for £78 a year. The building was lined with wood and papered. Inside, the teacher’s desk took pride of place and contained most of the books used during the school day. There were some others on open shelves around the room. Pupils sat on forms around eight tables, each a little longer than a metre by about half a metre.

Enrolments grew. Mattingley was held to be a good teacher — and the population was growing too. Growth was accommodated by keeping pupils in the infant classroom until there was space for them to go into the upper school.

Elaine Warne, in her Errol Street: The First Hundred Years 1857—1957, describes the curriculum: In the upper school there was a strict timetable with 30-minute lessons each day in “Reading and Explanation, Elementary Tables and Notation, Pointing out Parts of Speech, Grammar, Geography, Writing, Spelling from Dictation, and Singing”. Girls were offered “Sewing and Knitting, Making, Mending and Cutting Out, Plain and Fancy Work”, as well as Crochet and Berlin Wool work (a type of embroidery done on a durable canvas base). Boys did Mensuration, Geometry, Algebra and Bookkeeping. Some but not all pupils were instructed in Latin, French, Dancing and Instrumental Music.

Dr William Maloney, a long-serving member of parliament for Melbourne, was among the pupils at Mattingley’s school and went on from there to Scotch College to complete what we would now call his secondary schooling.

Like his mother’s, Albert’s school had no church connections, and was thereby ready to become a so-called national, and later a common, school. In fact, only one year later, in August 1858, the schools combined as No 206 with the name Hotham or Errol Street. Once the 1872 legislation for compulsory schooling came into effect at the beginning of 1873, Hotham 206 became State School 1402 North Melbourne (Errol Street) and within a year was in a new building on a new site.

When he retired in 1894 Albert Mattingley had the uncommon distinction of being No 1 on the Education Department’s classiﬁed roll of teachers.

Mattingley Lane off Queensberry Street next to the National Bank commemorates the early Mattingley schools in the busy end of Errol Street. The present Errol Street School is on the 1874 site in part of the building, now much renovated. Its founding date, however, is taken from the combining of Elizabeth’s and Albert’s schools in 1858. In May this year, Errol Street School will be celebrating its ﬁrst 150 years.

As part of the celebrations, the Hotham History Project is mounting a display in the newly decorated foyer on the development of schools and educational facilities in North and West Melbourne in the 19th century. This will run from shortly after Easter until the school’s celebrations in May.