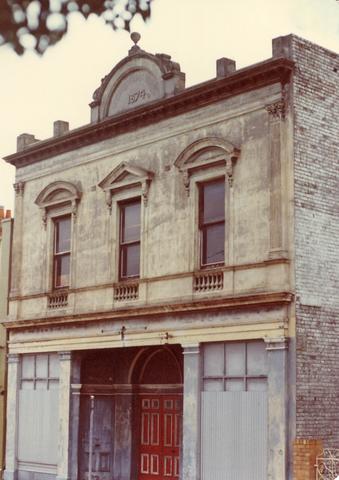 James Munro was a temperance man. He represented North Melbourne in the colonial parliament and was briefly premier of the colony. His fellow member in North Melbourne, John Curtain, was a publican. His hotel on the corner of Rathdowne and Elgin Streets is still there but recently changed its time-honoured name.

Munro was English, Curtain Irish. Munro tended to side with the liberals, Curtain with conservatives. While Curtain traded in liquor and property Munro made money from coffee houses, banking and what we would call today ‘financial services’. Munro favoured female suffrage, thinking it would swell the temperance vote. Curtain saw no advantage in it. Both lost their fortunes in the 1890s depression Munro because he was borrowing from himself through his chain of companies, Curtain because the wine and distilling industry collapsed.

When Munro was running for North Melbourne in 1874 his temperance connections eased the trials of campaigning: “Three years ago when I last met you”, he told a meeting of electors in North Melbourne, “the very best accommodation I could get was the top of a lorry in the open air. I am glad, very glad, the electors are now enabled to assemble in such a pleasant and convenient hall.”

This meeting was reported in the North Melbourne Advertiser of March 27, 1874. The hall in question was the new Temperance Hall in Queensberry Street. The hall is still there, just near the corner of Chetwynd Street, in excellent condition, with 1874 inscribed over its doorway above the information that it is now occupied by the Legion of Mary. It is a long, long time since it was officially known as the Temperance Hall, but its several other names have not stuck. In internet searches it features in advertisements for housing in Temperance Hall lane.

There is a touch of populism in Munro’s reference to the back of a lorry. When, in 1877, the electorate was split and Munro campaigned against Curtain for Carlton, he defied those who prevented him from hiring a hall by building his own in the space of a fortnight. Although Carlton was a stronghold of the liquor vote, Munro won the seat.

The Temperance Hall got its name from the Hotham Temperance Hall Company that was formed on 8 January 1874 by five North Melbourne tradesmen headed by William Riddell, a tailor. Construction must have been quick, what with the company being formed on 8 January, the land being bought by Riddell from Andrew Knight on 4 March and the meeting in the new hall reported on 27 March. Perhaps it too went up in a fortnight.

The building is in two parts. What you see on Queensberry Street is a front entrance to the hall flanked by two shop fronts. In December 1874 one shop was occupied by Miss McMahon, a fruiterer and confectioner and the other was empty. Inside the front door is a foyer from which a staircase leading to a balcony overlooking the floor of the hall.

The hall has been separately built behind the shops and the foyer so that it can be lit and ventilated from above by a glassed ridge. This feature can be seen clearly from the side of the building. The shops by contrast are lit by fanlights. The essential materials are brick on bluestone foundations. The building on the left of the hall was also owned by Riddell and was perhaps where he toiled as a tailor.

The hall has a stage and references to concerts in the Advertiser suggest that it was meant to be a venue for non-alcoholic meetings and entertainments. The Advertiser of May 1875 reports that the Thursday concerts were “dull & insipid” and “attended by noisy youths”.

At the time, with the old town hall demolished and the new one yet to be built, a hall with a stage and seating for some hundreds had a market niche that it apparently did not fill successfully. Nor would dull programming and riotous audiences be its only problem. The new Town Hall opened in 1876 and hosted numerous popular concerts, grand balls and enlightening public lectures.

The Temperance Hall as it has continued to be called despite many changes would have to wait sixty-five years to be the focus of truly distinguished and popular entertainment.

Meanwhile the Temperance Hall company wound up in 1881 having at some stage sold the hall to the Hotham United Friendly Societies. The Societies stopped meeting in the hall in August of 1882.

In 1883, with the hall only nine years old, temperance gave way to salvation. In that year the War Cry reported that the Salvation Army had taken the hall to use as their barracks. Curiously, it seemed that the Army was in need of a safe haven.

The Auckland Star of 15 February 1883 reported that the “Government of Geneva had expelled the ‘officers’ of the Salvation Army from their territory, on account of serious riots resulting from the eccentric proceedings of the Army.” The Army, according to the Star had met with similar hostility in “various English and Scottish towns”. Against this, however, is the tale of success in Australia, first in South Australia, then in Melbourne in the suburbs of Hotham and Collingwood. The Star then quotes the Age, thus:

The Hotham Temperance Hall accommodates about 660 persons, and since its engagement by ‘The Army’ it has been crowded at every service. The result of two months work is said to be that about 200 men and women have abandoned their previous vicious courses and of these about 80 have ‘testified’ and enrolled themselves in a corps to carry on the work by endeavouring to save those with whom they were formerly brethren in sin.

In 1909 the hall changed hands again but retained its spirit as a venue for conversion and commitment to the way of the Lord. The new owners were the Pentecostals whose churches after 1927 would be known as Assemblies of God. Pentecostalism was then but a few years old, having been born at a famous revival meeting in Azusa Street Los Angeles on 14 April 1906. From that origin, the Pentecostal church became known for its dramatic services involving ecstatic spiritual experiences, miracles, healing and speaking in tongues.

Revival spread rapidly round the world reaching North Melbourne within three years. The website of Christian Assemblies International records that:

The first Pentecostal church in Australia was started by Mrs Janet Lancaster, a former Methodist born in Williamstown, Melbourne, just three years after the Azusa Street revival in Los Angeles. After reading a pamphlet from England entitled Back to Pentecost, she began to seek for the infilling of the Holy Spirit, which she received in 1908. Her testimony convinced others and, together with a few associates, she purchased Temperance Hall in Queensberry Street, North Melbourne. On New Year’s eve 1909 it was opened as Good News Hall.

One would wish for more detail about Mrs Lancaster’s infilling and testimony, but it is clear that she was a compelling figure. The movement apparently flourished. A typical week in the 1920s started on Sunday with breaking of bread at 11, prayer at 2 and gospel service at 7pm. On Tuesday at 6pm, there was a ‘tarrying meeting’. Friday at 8pm was cryptically called ‘open air’ (presumably some sort of witness in the streets), Saturday saw prayer and fellowship at 8pm and every service was followed by prayer for the sick.

In 1926 the Good News Hall was renamed the Apostolic Faith Mission. In keeping with the pattern of resisting name changes the notice of the church secretary, Annie Andrews’ death in July 1932 continued to call it the Good News Hall. The name change had been proposed by a visiting South African evangelist, Frederick Van Eyck, but his activities provoked a break-away in 1927 by Queenslanders calling themselves Assemblies of God.

Mrs Lancaster stayed put in the Apostolic Faith Mission until her death in 1934, but the enterprise in Queensberry Street quickly folded after that. The Lord would no longer be sought in the Temperance Hall, as it stubbornly continued to be known outside Pentecostal circles. Within a very short time the Hall would become a site for the preaching of dialectal materialism and the celebration of progressive music… which seems a suitable point at which to end this chapter in the story of North Melbourne’s Temperance Hall.

Apart from specific references in the text, much of the information on which this is based comes from MF Aladejebi, THREE NORTH MELBOURNE (HOTHAM) HALLS: TEMPERANCE HALL, 1874, FREEMASONS HALL 1874, AND SALVATION ARMY BARRACKS, 1883.Thesis (Undergrad), University of Melbourne, Faculty of Architecture, Building and Planning. I have had much useful help from Mary Kehoe, Bill Liddy and Lorna Hannan.