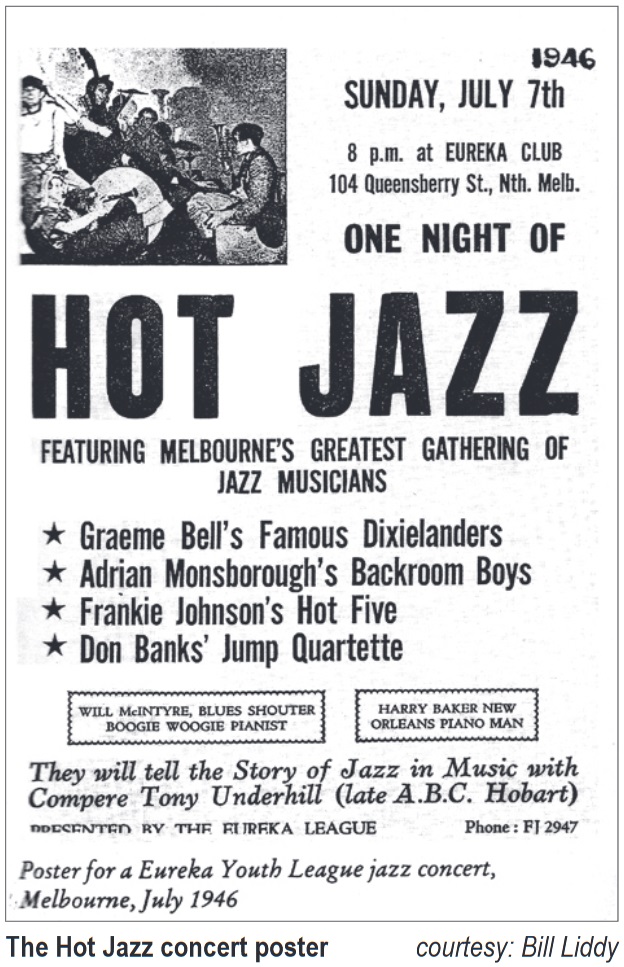 I don’t know if Christian groups favour a particular colour. Blue or white seem like possibilities. Temperance 1 have always thought of as grey. despite its inclination to militancy. Whatever the case, there can be no doubt that the Temperance Hall, now located at 456 Queensberry Street, changed its colours to radical red m the 1940s.

As I wrote in the last News, temperance and evangelism occupied the Hall for its first sixty years. Name changes were attempted, most notably to the Good News Hall when the Pentecostals set up in the Hall, but generally the original name Temperance Hall has stuck.

Evangelical activity in North Melbourne had declined by 1936 The directories that list occupants of buildings in Melbourne (essentially for postal services) suggest the Good News hall by then was confined to publishing rather than ceremonies and proselytizing. Between I938 and 1945. However, another evangelical enterprise, the Bible Standard Lighthouse Temple was named as the occupant of the hall.

The evangelist this time was an American woman, Mina ‘Doc’ Brawner, who felt called to leave the Lighthouse Bible Standard Church in Eugene Oregon to do missionary work m New Zealand and Australia. She started in Australia with a tent mission in Sydney. moved her base to Melbourne and also spent just over a year in Ballarat.

Brawner’s specialty was preaching about divine healing, complemented by practical charity, much needed in the years of the Great Depression. Following the example of a noted American evangelist, Aimee Semple McPherson, she dressed in white with a blue cape. For her outdoor preaching, she had a folding organ and pulpit. During World War II, she returned to the U.S., but the Queensberry Street Hall continued to carry the Temple’s name until the end of the war.

Being much out and about, Brawner might not have used the Temperance Hall all that much, nor paid attention to the credentials of its tenants. The first sign of its future came in 1937 when the Hall received mail for the F.O.S.U. It took Lorna and me a while to figure out what these initials in the directories might mean.

To begin with we tried to connect them to freedom of speech, mainly because there is a local belief that at some stage in its life the Hall was a harbour for radicals denied a platform elsewhere. No evidence for this can be found, but it might yet tuns up. But then some delving into histories of radicalism in Australia threw up the most likely meaning of F.O.S.U: Friends of the Soviet Union.

It seems odd today that an evangelical Christian church would host, albeit at arm’s length, an organization identified with the Communist Party whose role seemed to be to promote fronts such as anti-war movements. In fact more was to come.

In 1941, the Party’s youth organizers established the Eureka Youth League, which would thrive on anti-fascist and world peace platforms. In 1942, the Eureka Youth League moved into the Queensberry Street Temperance Hall, still nominally at least evangelical Christian, and in 1946 the League became the official tenants. By then friendship with the Soviet Union was okay again.

The League campaigned vigorously to open a Second Front in recognition of the role the Soviets were now playing in fighting Germany. No matter who the official tenant was the Hall had swapped definitively from blue and white, which are after all the colours of the Eureka flag, to deepest red.

In those days, perhaps its heyday in Australia, the Communist Party and its offshoots such as the Eureka Youth League and the New Theatre attracted and sponsored new art and local artists. Major literary figures such as Judah Waten, Dorothy Hewett, Katharine Susannah Prichard, Frank Hardy and Alan Marshall were Party members at various times. Wendy Lowenstein and Ian Turner contributed notably to our history writing. Noel Counihan and Vic O’Connor gave social realist painting a good name.

The New Theatre memorably produced Dick Diamond’s folk musical based on the shearers’ strike of 1891. So the unorthodoxies of art gave some balance to correct line thinking, exemplified by this sort of writing in the League’s Philosophy syllabus: ‘The militant worker must possess a method of analysis and of correct reasoning in order to carry out correct revolutionary action…’

Folk songs, especially songs of labour and rebellion were a natural form for left wing groups. Communism, however, was ambivalent about jazz. Stalin was no fan of modern art forms and eventually would ban jazz. On the other hand, jazz symbolised freedom among dissenters, such as those in Czechoslovakia. ln short, it was dangerous stuff. But the Eureka League liked it and backed it in a big way. In particular it backed the traditional jazz that originated in New Orleans.

By the 1940s Jazz in the U.S. had migrated to Chicago and beyond and transformed into big bands, with big name leaders such as Duke Ellington and Benny Goodman, playing swing. And with Dizzy Gillespie and Charlie Parker developing bebop, this was effectively the beginning of modem jazz. Traditional New Orleans jazz, however, often linked to later forms via performers such as Louis Armstrong and the popularization of the blues.

In 1944, Harry Stein, a League member and a jazz drummer, started up the Eureka Hot Jazz Society. Its most noted member, Gramm Bell, had a regular gig with the Society and two years later was the main feature of the Uptown Club, still in the Temperance Hall. Bands change their names and personnel, but years later I think of it as Gramm Bell’s Dixieland Jazz Band, fronted by Roger Bell on trumpet, Pixie Roberts on clarinet and Ade Monsborough on just about anything. Graeme Bell played piano in the rhythm section.

Though not the most prominent performer in such a band—the front line dominated the show—Graeme was a great organizer and publicist. He saw the connections at the time between jazz and the Left. To be modern and anti-conservative meant being anti-fascist and therefore left wing. Moreover, the traditional jazz style promoted rolling improvisation by soloists, which Bell saw as democratic, free and interactive—the opposite of commercialised music. The huge contributions of both Bell and Stein to Australian jazz are now commemorated in the Doubly Gifted Annual Bell Jazz lectures In Sydney.

Bell’s association with the Eureka Hall gave it a renown it might not otherwise have had, but what ensconced the Hall permanently in the history books was the First Australian Jazz Convention of 1946. Ade Monsborough had suggested such a convention in 1944 when he was still in the Air Force. With the backing of the Eureka Youth League the idea materialized in Queensberry Street in December 1946.

The souvenir program was published by Angry Penguins and reproduced in facsimile in 1985. In his introduction to the facsimile Bell thanked Max Harris, John Reed and Sid Nolan for supporting the convention and through them Angry Penguins and the Contemporary Art Society for ‘sticking then necks out in the early forties…when (jazz) music was all but laughed at by commercial media and dance-band musicians alike’

‘….as I recall those delirious days to North Melbourne’, he wrote, ‘I can once again, feel the unspeakable excitement in the discovery that out there, in other parts of Australia, were young blokes on the same wavelength… there will never be anything like the 1946 Convention where we walked on air in a state of euphoria for five days’.

In contrast to the idea of festivals where bands perform for mass audiences, the jazz convention was conceived as a get together for musicians, who paid to attend. It still is, for it has been running continuously, each year in a different location – the 66th this year in Bundaberg, the 67th next year in Forbes – making it the longest running jazz convention in the world.

The following year the Eureka League sponsored Graeme Bell and his Dixieland Jazz Band to take part in a World Youth festival in Prague. The band was a huge success with the Czechs and the more Moscow disapproved the more traditional jazz became popular with youth in Eastern Europe. The band stayed on in Europe through 1947 and 1948 and was a hit in Pans and London.

On its return, however, the members broke with the Eureka Youth League, who denounced them as unprincipled for turning their backs ‘on the thousands of young workers who made the tour (to Prague) possible’. The era of big tune jazz in the Queensberry Street Temperance Hall had ended, and in a decade or so events in Hungary, in 1956 and Prague in 1968 would see off the reds too.

I don’t want to leave this story of the Hall without referring to Eureka and its symbol, the white cross and stars on a blue background. The great majority of Australians, I’m sure. think of the Ballarat uprising and the flag as signs of rebellion, of protest by workers against oppressive authority.

To my dismay I found on Google that both the name Eureka and the flag have been appropriated by the extreme Right to advertise racist propaganda. Pauline Hanson also used the Eureka flag, but she could give this mob a lesson in moderation. On their website there is even an approving video of Hitler ranting against Jewry. One wonders in this age how this can happen?

Sources: There is nothing much on the web about the Temperance Hall. It deserves a Wikipedia entry. I found the various Christian occupants by googling the names of then churches and preachers. Di Gardiner and Jill Barnard tracked down material on FOSU and led to the invaluable Trove. The material on Graeme Bell and his association with the League and the Hall, including the facsimile of the Australian Jazz Convention’s 1946 program was lent to me by Bill Liddy, who is an abundant and generous source of information about North Melbourne. The white supremacists and Jew haters are googlable under Eureka but they should not be encouraged.

Read “part one” of this fascinating story here.