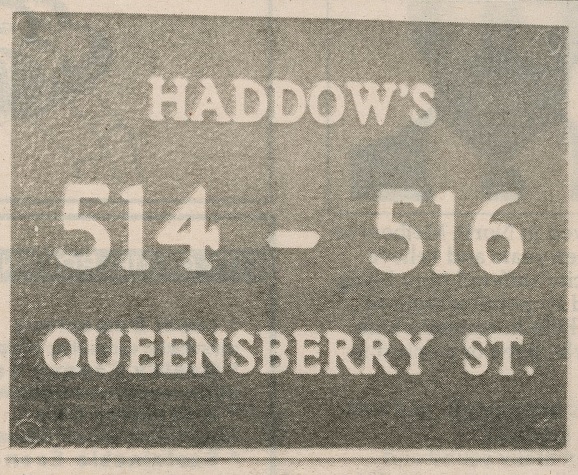 Some of North Melbourne’s oldest buildings have been given a new life in recent years. With an increase in demand for inner city living, home buyers have turned their attention to the region’s old work places.

An O’Shanassy Street house sold this month was built as a school hall in the 1890’s.

In Queensberry Street a building built in the mid-1800’s was known as ‘Haddow’s’ hardware shop for more than a century.
North Melbourne architect, Peter Jensen converted the shop to a modern home.

Mr Jensen has been designing renovations and buildings from a shop at 113 Errol Street, North Melbourne for ten years.
He is one of four architects who work at the Errol Street shop. The shop features a unique window display of models of buildings designed by the firm.

Mr Jensen said there have been many opportunities to transform buildings in North and West Melbourne in the past five years: “Regulations have changed, zoning controls have loosened up considerably and actively encouraged residential use in areas previously designated purely for industrial or commercial use.”

He said some areas, particularly in West Melbourne, started off as residential until industry was pushed from the CBD and began to spread into North and West Melbourne early this century. “A lot of areas you’ll find are now reverting back to their original uses as residences.”

He explained that those areas of North and West Melbourne were zoned for mixed-use, which meant people could transform buildings for commercial or residential purposes.

Mr Jensen said there was potential for conﬂict, with residents and-businesses existing side by side: “But if people are aware of the situation, they are getting themselves into, they can co—exist”.

He said the converted hardware shop in Queensberry street was a good example of this: “The shop is in a mixed zone, which means that neighbouring buildings are commercial…the owners therefore must be aware that they may have to put up with the sounds of industry.

But the owners (of the shop) were prepared for that and accepted that,” he said. “That’s one of the reasons you live in North Melbourne, because you want that sort of diverse activity and lifestyle. “

He explained that much of the character of the hardware shop, once operated by the Haddow family, was brought to life for the house.

The building’s industrial past was not lost when modern facilities were added in the conversion. “We created things like a roof terrace, a rooftop spa, a little gazebo and all this had to be done in a style which didn’t destroy the original character of the building. “We tried to play off that creating all the new elements out of steel and making it quite industrial looking and fairly brutal…the attempt being to replicate the stark industrial honesty of a lot of 19th Century buildings.”

The building’s facade, interior walls and upstairs ﬂoors were retained. Walls on the second floor were repaired and glazed to bring. out their original colours—charcoal, greens and deep blues.

Mr Jensen said there were ways to help people living in converted buildings feel comfortable and not hedged in by industry: “It’s a matter of maximising the opportunities for open space and private living space. “You don’t need a lot of area, but as long as there is a small pocket which perhaps has a View, certainly has some sunlight and has a chance at a garden and has the potential of being partially protected or private—it’s possibly all that most people need for living close to the city.”