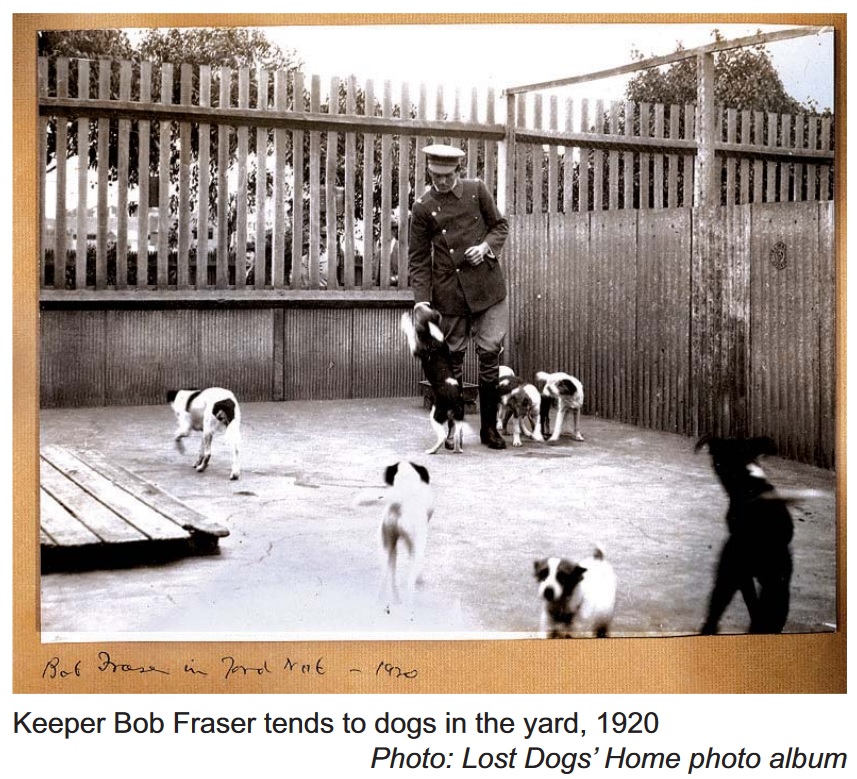 One hundred years ago Australia had a population of 4,820,172 people. On 12 March 1913, Lady Denman, wife of Australia’s Governor General, named the capital Canberra. Lord Denman told those at-tending the ceremony that the Australian people should not cavil at the expense of building another city because Sydney and Melbourne were already overcrowded!

No one counted the number of lost and abandoned dogs in Melbourne, but there were enough to cause a serious problem. Local councils were responsible for catching and disposing of them and, as most of the dogs were unclaimed, the most common method of disposal was either poisoning or drowning.

Two weeks before the naming ceremony for the city of Canberra, on 28 February 1913, Lady Denman opened the gates of The Temporary Home for Lost and Starving Dogs in Gracie Street, North Melbourne. Lady Denman agreed to be the patron of the Home.

A committee had been established in December 1910, which had set itself the task of establishing a permanent home for lost dogs, but the search for suitable premises took over 18 months. NIMBYism was a factor in this — it’s not surprising that the public did not want dogs that barked at all hours of the day and night as neighbours.

Eventually, after much lobbying of politicians, the committee were advised that there were Crown lands available in North Melbourne, which were considered highly suitable. They asked the government to put the land up for auction and four blocks of land were purchased for £257.

The land was close to the Macaulay railway station and the West Melbourne tramline. The committee built a simple weatherboard cottage with a boardroom, three rooms and a bathroom for the use of the keeper. There were also six large yards with sheds, each supplied with water and sewerage, various sheds for storage and cooking, a dispensary and a lethal chamber. It was completed for the approximate cost of £500.

In 1934 The Lost Dogs’ Home expanded its services by building a hospital. At first it operated in temporary accommodation and was open from 2.00 to 4.30pm Monday to Friday under the management of Mr A.W. Adeney, GMVC, BVSc. It treated the animals of those who were unable to pay veterinary fees.

In January 1935, Miss Ann Flashman was appointed as the first full-time veterinary surgeon. She was a graduate of Sydney University and later married Sir Arthur Rylah, who was Victoria’s attorney-general in 1955–67 and later deputy premier and chief secretary. Lady Rylah was well known for her column on animal welfare in the Herald.

Incidentally, in 1914 The Lost Dogs’ Home had also appointed a woman as one of its two honorary veterinary surgeons. Miss ‘Belle’ Bruce Reid had graduated from Melbourne Veterinary College in Fitzroy in 1906 and was the first woman in the world to graduate in veterinary science.

The next substantial renovations occurred in 1983 when some friends of the Home, Mr and Mrs Newman and Phyllis Strong, donated money for the provision of new hospital facilities. Some old buildings were demolished and 78 new covered kennels were built and installed with electrically heated floors. The reception area was redeveloped and staff facilities were improved.

The hospital was provided with a fully equipped surgery, recovery room and X-ray facilities, making it one of the most modern veterinary hospitals in Melbourne. However, the clinic was run as a private concern by one of the two vets and did not add much value to the operation of the Home.

Despite all these improvements The Lost Dogs’ Home began to lose money and in 1986 had recorded a deficit for two successive years. Its credibility with some local councils had led to withdrawal of contracts and the future viability of the Home was in doubt. A new general manager, Dr Graeme Smith, was appointed in April 1986 and given the task of reinvigorating the Home.

Since then The Lost Dogs’ Home has expanded and prospered, making the most of every opportunity. Some sizable bequests and the establishment of a fundraising program have helped the Home, but the development of far-sighted business plans and alliances has also been instrumental to its success.

It joined forces with the Cat Protection Society and has now opened a separate facility for lost cats.

It has built a new training and education centre, a sick and injured shelter and a state-of-the-art veterinary clinic. Frank Samways was a successful businessman and his generous donations and bequest enabled the clinic, named after him, to be built close to the Home at 1 Boundary Road. All proceeds from the Frank Samways Veterinary Clinic go towards helping dogs and cats in the shelter.

Part of the Home’s mission is to raise awareness of the value in adopting a shelter dog or cat — most come into the Home as strays, though occasionally dogs and cats are taken in because their owners are unable to continue caring for them. Adopting dogs was not a popular choice when Graeme first joined the Home, but today adoption is often the first option when looking for a pet.

Graeme pointed out the advantage of adopting an adult dog or cat — its size and temperament are already established. He also thinks the public has developed confidence in the vetting procedures that take place before dogs and cats are put up for adoption, and the success of the program has spread through word of mouth.

Prospective owners are encouraged to spend time getting to know their chosen dog or cat before making the final decision, but animals can be returned within two weeks if they are found to be unsuitable. To combat impulse purchases and reduce the incidence of returned animals, the Home implemented a ‘Pet Licence’ test to educate potential owners on their responsibilities, and the adoption team are on hand to guide people in their choice.

The introduction of competitive tendering legislation under the Liberal government in 1996 gave The Lost Dogs’ Home the opportunity to move further into the area of animal management, enabling it to develop a total service for municipal councils. It now runs two pounds in Brisbane, one in Echuca, one in North Melbourne and six in Melbourne’s south-eastern suburbs. Until recently, the Home managed a small rural shelter for the Shire of Wingecarribbee in New South Wales.

Recently the Home entered into a relationship with Melbourne University, giving all fourth-year veterinary students the opportunity to spend two weeks performing work experience in the Home’s shelter hospital. Under supervision, students obtain valuable experience desexing dogs and cats for adoption, while at the same time gaining an understanding of the issues involved in animal welfare. Such an opportunity was not available to Graeme when he was a veterinary student.

While the Home continues to work hard caring for the many dogs and cats that come into its shelters every day, an important part of its role is to raise awareness about responsible pet ownership. Through educating pet owners and future generations of pet owners, they hope to improve outcomes for companion animals. The Home has successfully developed education programs such as Pet Licence and school visits and it uses social media to reach a wide audience.

A hundred years on, the Home continues to meet challenges as they arise. This article began with the surmise that Melbourne in 1913 was overpopulated, and many may believe this is even more the case today. The industrial base of suburbs such as North Melbourne is being taken over by dense residential developments under the banner of urban renewal.

This is now an issue for the Home. The area has been rezoned and the encroachment of new apartments will mean an extensive and extremely expensive redevelopment of the dog kennels. Indoor accommodation will be re-quired to prevent disturbance by barking dogs. The Home houses approximately 250 dogs at any one time, so this will be an enormous task if The Lost Dogs’ Home wants to remain at its iconic Gracie Street address.