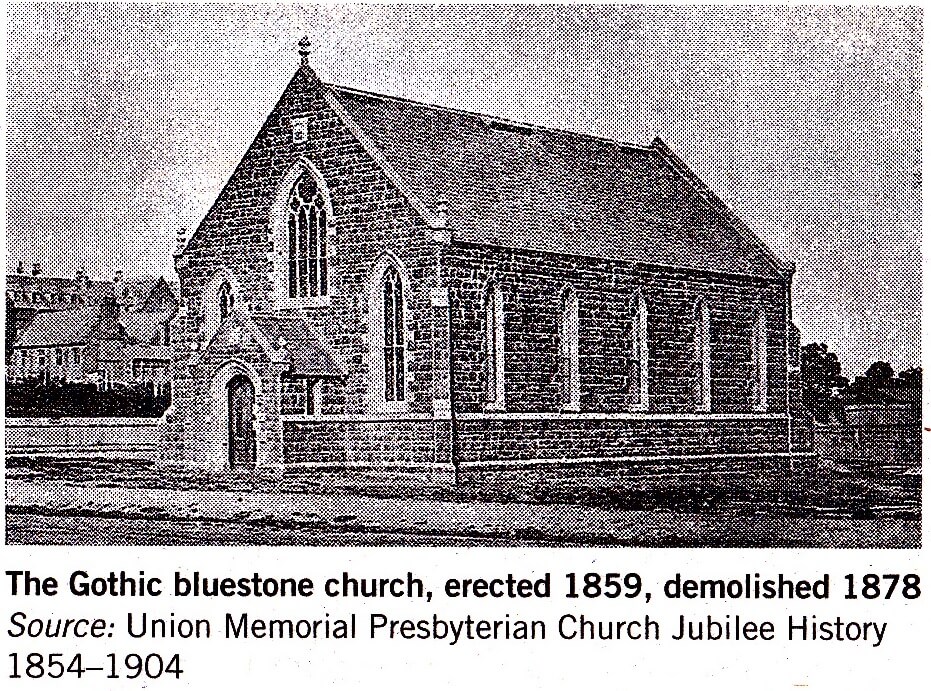 How many know that the small block bounded by Curzon, Queensberry, Union and Elm streets contains the highest concentration of buildings in North and West Melbourne listed on the Victorian Heritage Register?

The Presbyterian Union Memorial Church complex comprises the 1879 church with its landmark 46-metre spire, the Victorian manse, the Elm Street church hall, the parsonage and five cottages along the Queensberry Street frontage. The adjoining building, the former primary school on Queensberry Street, part of the Melbourne College of Printing and Graphic Arts when it closed in the 1990s, is also on the Heritage Register.

In fact, the only buildings on the block that are not listed on the Heritage Register are the two-storey infill building on the corner of Curzon and Queensberry streets, the Curzon Street Children’s Centre behind the Elm Street Hall, and the decrepit 5-6 storey cream brick building on the Elm Street frontage.

The two-acre block bounded by Curzon, Queensberry, Union and Elm streets, directly opposite the Melbourne Benevolent Asylum, North and West Melbourne’s first building, was granted to the North Melbourne Presbyterian community in December 1854. In 1855 a prefabricated iron building, measuring 52 feet x 32 feet, was donated by the Denominational School Board and erected in Elm Street on the site of the present multi-storey building. The first Presbyterian service on the site was held in the iron building on 30 September 1855 and the following January a school opened in the building with John Marshall as the first teacher. The North Melbourne Grammar School, as it was formally known, was referred to by many of its pupils as `The Old Tinpot School’. It was removed in 1897.

The United Presbyterian Church of Victoria formed in 1859 from three separate Presbyterian movements. A bluestone church to provide a place of worship for the local Presbyterian community was erected facing Curzon Street in 1859 and the two-storey manse was constructed in 1868. By the 1870s the church had become too small and the parish decided to build a new church. The Gothic bluestone church, less than 20 years old, was demolished in.1878 and the materials used to build a Sunday School around the corner in Elm Street. The parish also sold the western half of the site (less than one acre) to the Education Department for £2600 in 1877.

The present church, designed by architect Evander McIver in Gothic Revival style, was completed in 1879. The brick parsonage on the corner of Curzon and Elm streets was built in 1888. Four cottages were designed by Inskip and Kemp and constructed in 1911 along the Queensberry Street frontage, with a further four added in the same design in 1915. Three of these cottages were demolished in the mid 1960s.

The citation on the Victorian Heritage Register states that the Union Memorial Church complex is of historical, social, architectural and aesthetic significance to the State of Victoria.

“It is of historical importance as a rare surviving example of an intact church complex built in the nineteenth and early twentieth century and including, church, manse, hall, parsonage and cottages. With its complex of buildings it is of social importance for its demonstration of the needs and operations of the Presbyterian Church since the 1860s. The construction of cottages on the site clearly demonstrates the practice of church organisations seeking revenue opportunities through property investment. Early examples of this rarely remain part of the original church complex. The Union Memorial Church building is of architectural importance as it epitomises a substantial Presbyterian church built in the latter half of the nineteenth century with its galleries on three sides. The nature of the meeting-house type of interior used by the Congregationalists, Methodists and Presbyterians can be fully appreciated in this church. This church is probably architect Evander Mclver’s best surviving work. The di-chrome brickwork, interior gallery, stairs and stained glass are just four of the notable features. The church hall is of architectural significance for the notable large exposed timber trusses. The spire and imposing exterior of the church along with the intact manse, rear hall, parsonage and cottages results in a complex of aesthetic significance, which is a landmark in North Melbourne.”

As mentioned earlier, the Education Department acquired half the Presbyterian Church’s original grant in 1877, and a two-storey Venetian Gothic-styled red-brick and stucco school building, designed by department architect Henry Bastow, was erected in 1882 to accommodate 640 pupils. It did not remain a school in its own right for very long, becoming an annexe to the Errol Street State School from 1894 until 1907. It was used to train young teachers for rural school work.

A pavilion was erected in 1922 to serve as a kindergarten. It stopped operating as a school in 1934 and was used by the Sustenance Branch of the Department of Labor. Later, it was used by the Melbourne Technical College for defence training.

In 1950 the site was acquired for the Melbourne Printing Trades School, later the Melbourne College of Printing and Graphic Arts: In 1954, tenders were let for a two-storey building along the Elm Street frontage at the rear of the 1882 school building. The building was completed in time for the 1957 school year.

As the printing industry expanded during the early 1960s, an additional three floors were added to the Elm Street building in 1966. Because the building was constructed for printing equipment, it is approximately 24 metres high at the rear, the equivalent of a modern eight-storey building.

The citation on the Victorian Heritage Register states that:

Other nearby historic buildings

The Queensberry Street school building relates in materials, siting and detailing to the Cable Tram Engine House, one short block to the west, which is also on the Victorian Heritage Register (No H0988) because of its historical and architectural significance to the State of Victoria.

Earlier this year, the North Melbourne Grandstand was demolished, despite its acknowledged heritage significance and structural soundness. With the constant speculation about the relocation of the Kangaroos, there is a real chance that North Melbourne will ultimately have no club and no significant physical heritage of the club’s proud history.

Meanwhile, the Elm Street building, a landmark eyesore in an area of low-rise buildings, out of character in height, scale and materials with its historic neighbours, has been allowed to remain, at considerable cost to the taxpayer. Many in the local community ask why this building has not been demolished and converted to much-needed open space while the powers-that-be argue over a use for the site.

Its derelict condition places one of the most historic precincts in North Melbourne at risk, as well as endangering the lives of nearby residents. (`Heritage building a filthy squat’, The Age, 15.12.05, page 5, reported that “syringes, beer bottles and what appear to be broken asbestos pipes litter the rooms” and “the electricity and water supplies were also on, despite exposed wires hanging from the ceilings and pools of water on the floors”.)

It begs the question whether those in authority really do care about our nation’s heritage and whether listing buildings on the Victorian Heritage Register for their protection is a farce. It seems that heritage is only recognised by public authorities when it suits their purposes and that there is a double standard when it comes to enforcing heritage protection.

It is the publicly-owned buildings in North Melbourne, such as the grandstand and the historic Queensberry Street building, which have been allowed to fall into disrepair.

On the other hand, the custodians of privately-owned historic buildings such as the Curzon Street Uniting Church, St Mary’s Anglican Church and St Mary Star of the Sea Catholic Church have demonstrated a commitment to preserving their heritage and engaging the community in the uses of these assets. Council and government have not always shown a similar commitment towards their historic public assets. 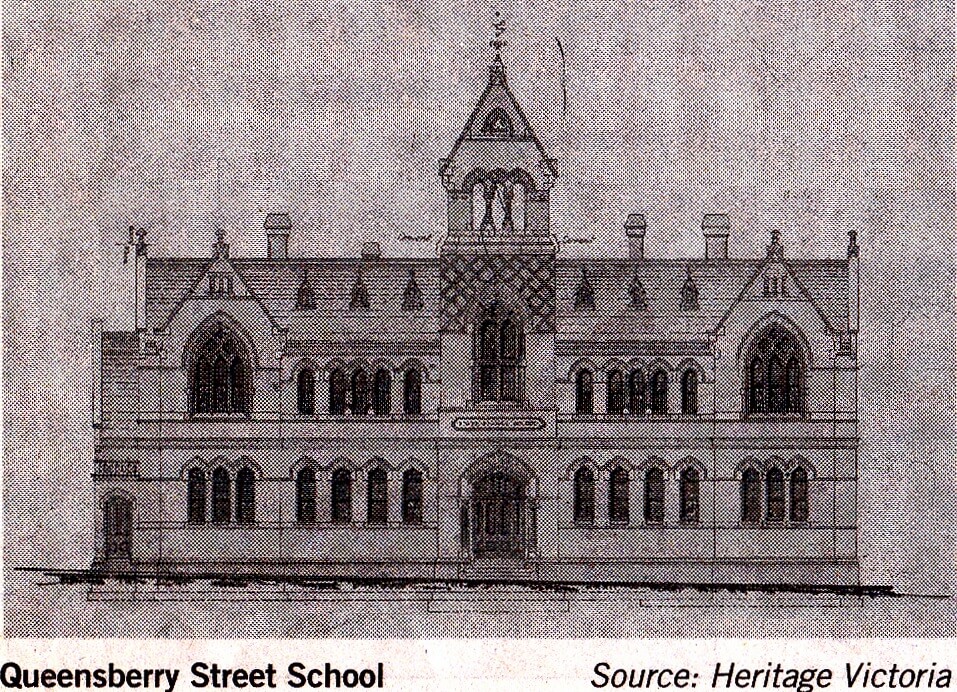