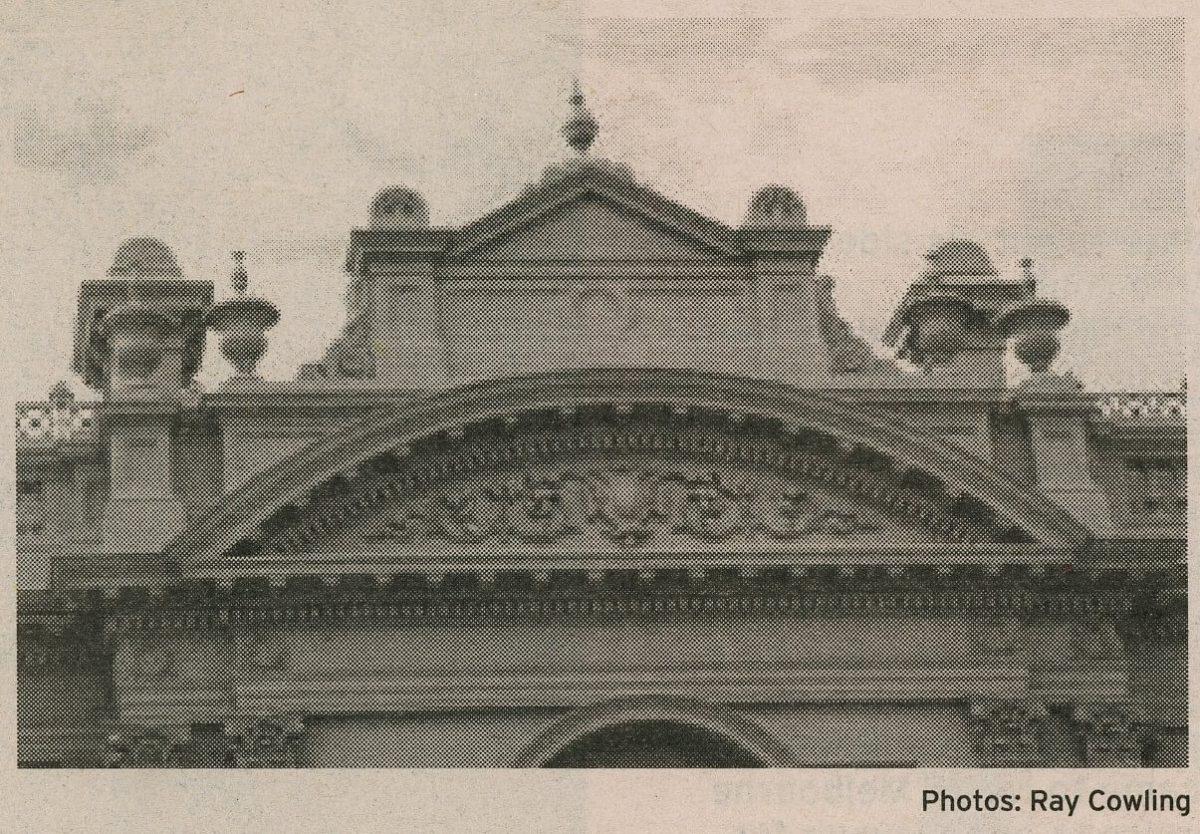 During the course of the afternoon, three speakers gave an account of their research, which was varied in subject and approach.

Bill Hannan reported on work in progress. He is finalising an early history of the North Melbourne Town Hall, after some early research undertaken by Robert Green.

Bill spoke of the early history of the area and the need for municipal facilities which led the Hotham Council to pay 6,000 pounds for the first brick town hall, only to have it demolished 12 years later.

Both of North Melbourne’s town halls have been on the same site. There had been an early plan to build the town hall down the hill near a creek, which is no longer visible today, which flowed from present-day Parkville and along Harris Street. A town hall in this position would have had a village feel, whereas the site that was chosen was in a position of power on a hill and in the developing business centre.

The first red-brick town hall was apparently not grand enough for the developing municipality and was replaced in 1876 by the building we see today. The exterior was as we see it now but the original building complex contained a number of municipal offices, the hall which was destined for balls and concerts, the courthouse and post office. Today some of these functions have quite disappeared while the building remains essentially the same.

Above the building was the tower and on it the town hall clock, which rang out the time and could be heard across the district. It was erected during a period when time was calculated locally and would have been an important feature of local life.

Bill drew attention to various classical features of the town hall building which are in a style that we have come to associate with government and authority and are quite different from the architecture of churches of the same period, many of which are neo-Gothic in character.

He also gave an account of the hub-bub and excitement that accompanied the opening ball at the town hall, with perfumes specially developed by Atkins, the local chemist, and much attention to the fashions of the day. The year was 1876 and the hit tunes were ‘I’ll take you home again, Kathleen’ and ‘My Grandfather’s Clock’. As Bill sang the songs, it was clear that many people in the audience remembered them, which is in itself interesting.

The town hall ceased to be the centre of municipal life in 1905 when North and West Melbourne were taken into the City of Melbourne, but it has remained an important landmark and a symbol of local identity ever since.

Our second speaker was Ruth Brook, who has been researching her Montgomery ancestors who lived in North Melbourne for many years. The family migrated from Ireland and worked on the shipyards. They had a strong connection with the North Melbourne Football Club, culminating with Ken Montgomery, who eventually became CEO. Ruth advised that it was important to ask questions of organisations as she found the AFL (and head statistician Col Hutchinson) very helpful, as well as Willow Tin Factory. Ruth finished with a delightful poem, ‘The Dash between the Lines’.

Our third speaker was Lorraine Siska. Lorraine introduced the CD ROM slide show `R-Rated Real Estate Belonging to North & West Melbourne’ which she and Alan Ashley produced for the 2002 Spring Fling arts project, ‘Links’. Alan worked on the digitising of photographs and design layout for the CD. Lorraine completed the research, which she found engrossing, particularly as the early answers widened the scope of her work and sent her back to uncover more detail and broaden her context. Her advice to others was to keep an open mind about where research might lead you.

The project started as a display of old photographs of real estate in North or West Melbourne with a digital photograph to show the changes over time. The changes were identified with an R word — redundant, respected, reprieved etc — thus the title. As the photographic portfolio expanded, a CD ROM format seemed the best way to present the material.

Some of the research uncovered important links with Victorian families such as the Gidneys, the Krcrouses and the Sinanians. The simple elements of architecture were seen to be as important as the grander styles for their unique contribution to the area.

After the formal part of the meeting, members had an opportunity to consult the CD.