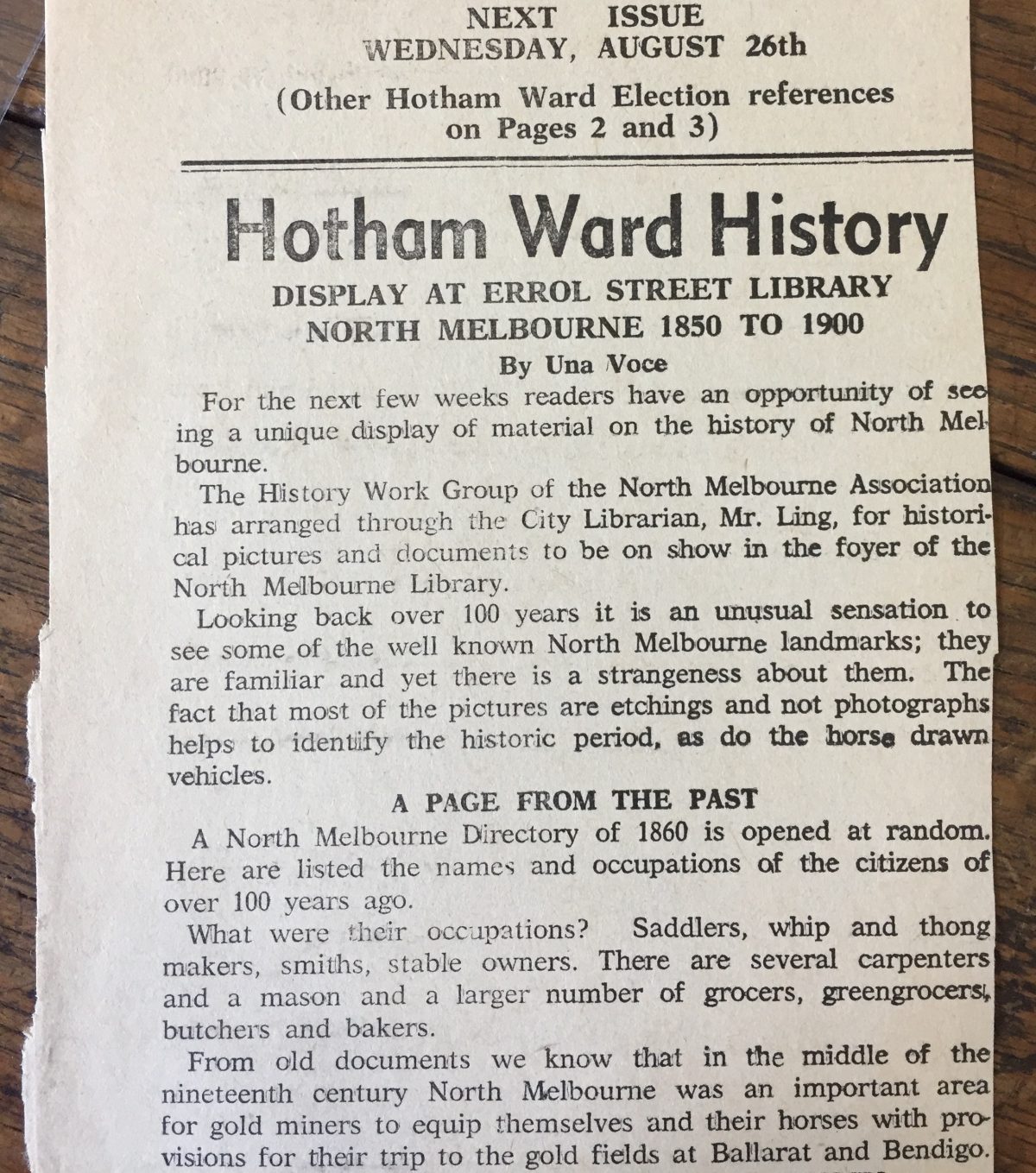 For the next few weeks readers have an opportunity of seeing a unique display of material on the history of North Melbourne.

Looking back over 100 years it is an unusual sensation to see some of the well known North Melbourne landmarks; they are familiar and yet there is a strangeness about them. The fact that most of the pictures are etchings and not photographs helps to identify the historic period, as do the horse drawn vehicles.

A PAGE FROM THE PAST

A North Melbourne Directory of 1860 is opened at random. Here are listed the names and occupations of the citizens of over 100 years ago.

What were their occupations? Saddlers, whip and thong makers, smiths, stable owners. There are several carpenters and a mason and a larger number of grocers, greengrocers, butchers and bakers.

From old documents we know that in the middle of the nineteenth century North Melbourne was an important area for gold miners to equip themselves and their horses with provisions for their trip to the gold fields at Ballarat and Bendigo.

WHERE ARE THE HILLS AND THE SWAMP?

On display, also is a book which quotes from letters of a pioneer, Mr. Rayson, which contains some information about the North Melbourne environment. Writing in 1860 he described the swamp which stretched from where the North Melbourne football oval is today, to the Yarra River on the other side of Spencer Street. The swamp was three miles wide and seven miles in circumference. He wrote—

“Now fancy seven or eight miles of frogs, and the pleasant music of their harmonious throats, while performing their matins and vespers.” (you can read what happened to the swamp when you, vistit the display).

Mr. Rayson also described the view from Flagstaff Hill as – “one of the dreariest prospects you can imagine; all barren sandy waste, not a spot of verdure to be seen except the old cemetery, surrounded by wooden palings with locusts in the trees that are there, chirping and screaming all summer, making the night hideous with their noise.” (You can find out what happened to make Hotham Hill, what Mr. Rayson describes as “Sahara”, When you visit the historical display.)

by Una Voce. First published in the Northern Advertiser August 1971.