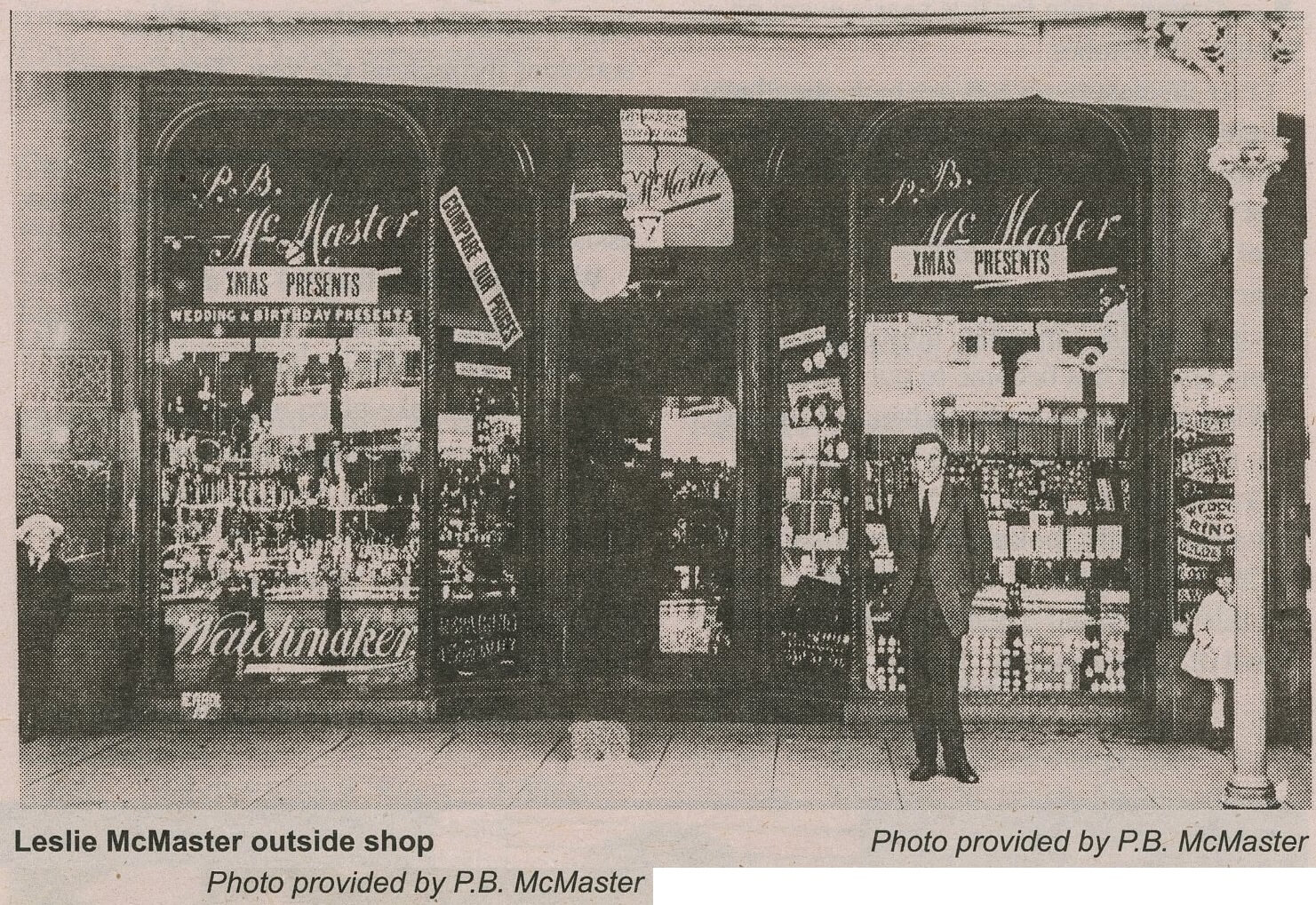 Eighty years and one week ago (give or take some small change) a daring heist rattled North Melbourne’s otherwise peaceful Errol Street.

The theft of three trays of diamond jewellery from P. B. McMaster and Son was the talk of the town, and was reported as far away as the Adelaide Advertiser.

The theft is remembered to this day, as long-time local and McMaster’s watch and-jewellery shop owner, Lucy Figliuzzi finds herself regularly regaled by customers about the exciting incident.

The stories have been told ever since she bought the shop from the McMaster family in 1986.

“I’ve had this shop on my own for ten years now, so I know it has a long history. I know about that incident through customers whose parents had told them about that story.”

“There must have been a thousand people in Errol St that afternoon!” She remarked wryly.

“Leslie McMaster [Peter B. Mcmaster’s son] was the shop attendant that day, he was born with a club foot. He was still here up un-til he passed.”

The man had asked McMaster to show him three trays of diamond rings. As Mr McMaster turned around to his assistant to ask her to re-trieve a fourth tray, the thief grabbed the three trays and ran out onto the street.

The trays consisted of mostly cluster-type diamond rings, a ladies’ ring that boasts a large central gemstone that is surrounded by a ring of tiny stones.

The three trays together were valued at around f1000 in 1934, during one of the worse economic depressions of the 20th century. Unemployment was high, and earnings were plunging. It was no wonder the theft was a news splash, with f1000 being the equivalent of approximately $82,000 in 2014

The thief was reported to be a well-dressed gentleman, according to the Adelaide’s Advertiser, who wore a grey overcoat and hat, and brown woollen gloves.

The thief was closely followed by Mr Mc-Master, who was hindered by his club foot. Mr McMaster pulled out the pistol he carried, shooting four bullets down the street after the fleeing thief.

Clutching the tray, and dropping a number of rings as he ran, the thief then jumped into a getaway car with two other men already inside.

According to The Advertiser, the shots fired had apparently only ‘narrowly missed’ Mr C. Binks, a business broker, and a Mr L. A. Roach, an Errol Street newsagent.

No bystanders were hurt however, and a number of them even picked up the stray rings and returned them to Leslie McMaster.

“The incident happened when there wasn’t an alarm system. There weren’t any silent alarms so people like jewellers, bankers, they all carried guns. And I think that continued up until the early ’70s.

“We have had snatch and grabs and just even February they smashed the window. Naturally now we’re alarmed and it’s a little bit different…. But back then having a revolver was the way of protecting what you had.”

Mr McMaster returned to his shop after the thieves had disappeared and called the police. The police arrived a few minutes later, but by then the men had escaped.

“My parents used to have a milk bar in North Melbourne in the 60s” Lucy says proud-ly. “I’m really proud of having the business. Although it’s not in my family, I did take it… still wanting it to be like a family jeweller.

“We’ve had people from three or four generations coming to get their jewellery repaired. And even if they’ve left the area, they’ll still come back. So we get a lot of modelling and restoration, for people coming in and they’ve often still got the little McMaster’s box!

“So we still have modern jewellery but we try and have as much of the old-fashioned ser-vices as possible. It’s a passion and it’s such a good feeling that everyone who comes through here leaves happy. It’s always a special occasion.”

Does anyone know if the felons were ever apprehended? Send a letter into the News if you know!