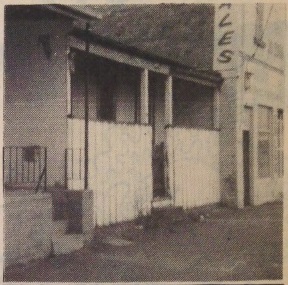 It doesn’t strike you as a house worthy of particular notice, but behind its simple facade, the Iron House at 59 Arden Street has a long history.

It was prefabricated in Britain and brought to Melbourne about 1853 at the height of the gold rush period when the call for housing was great.

North and west Melbourne saw a rash of housing hurriedly built to cater for the exploding population of intending gold seekers.

Many were built of wood or iron and sent out from overseas, prefabricated.

Tents were also a popular form of temporary housing at the time.

The Iron house is believed to have been manufactured by Morewood & Rogers of London although there is some local thought that it might have been imported from Scotland.

It was erected on the site for Andrew Abercrombie who had purchased the land from Thomas Le Mesurier Winter following the early public land sales in North Melbourne in 1852.

Both extremal and internal walls of the house are of corrugated iron. With some economy, pine boards from the packing cases were used to cover the internal iron walls and in turn, were covered with wallpaper.

There are four rooms in the house with an external kitchen built of brick at the back. Both house and kitchen are structurally sound and in relatively good condition considering their age.

The Iron House is classified by the National Trust and is on the Historic Buildings Preservation Register.

It is currently under threat of removal because the present owners wish to expand their business onto the site.

North Melbourne has lost much of its history through the inroads of industry and the Housing Commission.

The Iron House is the last remaining example of a once common building type in North Melbourne and as such represents a particular era in the history of the area.

It is thus precious to the history of North Melbourne.

The North Melbourne Association has submitted its concern that financial reasons might be the determining factor in the fate of the Iron House rather than the need to retain an important part of the community’s valuable history.