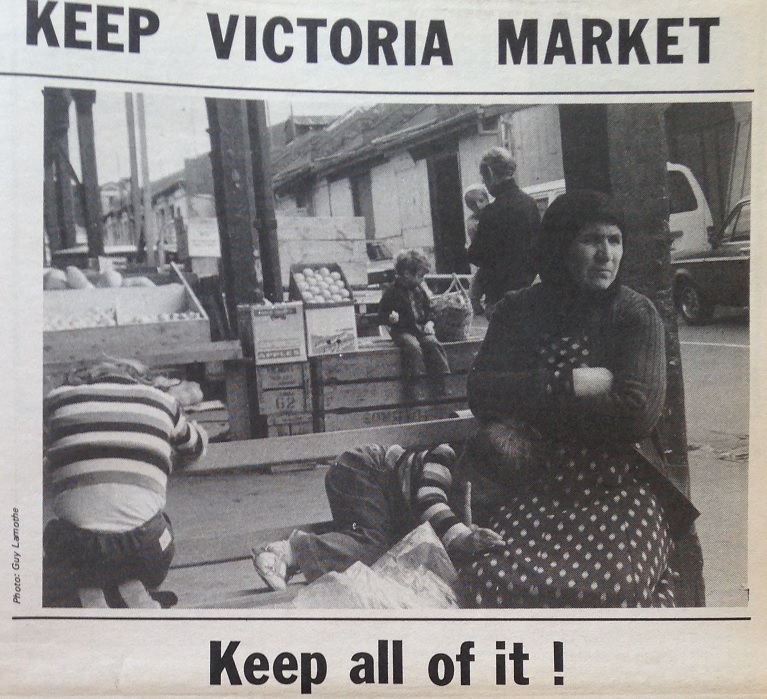 In 1971 after the inaugural meeting of the Keep Victoria Market Association, a public meeting was held at 44 Errol Street, North Melbourne. It was chaired by the late Rev. S. Yarnold and addressed by Cr. Armstrong, Colonel Birch, Administrator National Trust, Mr. Bruce Symon, a third-generation stall holder, Mrs. M. Erickson, secretary, and myself as chairman.

It was resolved that ‘The aim of the Association should be to maintain and further retail marketing at the site of the Queen Victoria Market in its present size, structure and form’.

Within a very short time, the KVMA had 1200 members, largely because of the membership fee of 20 cents. The many activities of the association were financed from donations. Incidentally, the membership fee is still 20 cents, and we again seek new members. Next, we collected 27,000 signatures to a petition which was submitted to the Lord Mayor and Councillors of the City of Melbourne. Alas with little effect. Then we found support from such a wide range of organisations as the National Trust and the Builders’s Labourers, the A.L.P. and the D.L.P., the Combined Pensioners’ Association, the Carlton Association, the North Melbourne Association and the Parkville Association, and others. Eventually on 17th February, 1976, the then Member for Melbourne, Mr. Barry Jones, introduced a deputation to the Premier, Mr. Hamer, who assured that the Market is safe. The current plan to erect a Museum and Library on the market site was not mentioned. We understood the Premier to say that he was ‘convinced of the value of the Market and like the Association wishes the retail market to be preserved as a whole’.

After the 99th birthday of the Market on the 20th May 1977 we formed the Victoria Market Centenary Committee, collected for a celebration, and received $1,000 from the Melbourne City Council for the great event. Friday March 17th was selected as the nearest market day. City Councillors and other guests joined shoppers and stall keepers for a Centenary breakfast. ‘Standing out among the 21 stall holders, whose families have been at the market for three or more generations was Mr. Louey Hay, 102, of Chinese descent; he has worked and lived at the market for 80 years. The Lord Mayor, Cr. Irvin Rockman, rang a bell to start the market birthday party, recalling when the Mayor used to ring a bell to open trading at the Queen Victoria Market 100 years ago (The Sun 17.3.78). First Day Covers were printed and stamped at the Victoria Market Post Office and a few are still available for sale.

The State Government now plans to list part of the market site to erect a Museum and Library. This would involve locating the cars underground in a two-tiered cellar. The KVMA and the market retail traders oppose this move. We agree that Victoria badly needs the Museum and the Library, but recommend that they be located near RM1T, whose students will be the main users. The market site needs to be preserved in its entirety. It is one of the few large open-air spaces left in the city and the options for its future use need to be left open. When the market was opened, the motor car was not invented. Who knows by what form of transport our grandchildren will go to market? Underground parking, even if it were free, would be costly in some ways, and most inconvenient. Who wants to carry heavy bags of fruit and vegetables farts to and then into a lift and then back to where a car is parked that is, if the lift works.

We have written to all Members of Parliament opposing the plan. Replies in support of our view have come from Members of all Parliamentary parties. We will go on. We mean to KEEP VICTORIA MARKET! We need more members. Membership is 20 cents and donations for our stand are invited.