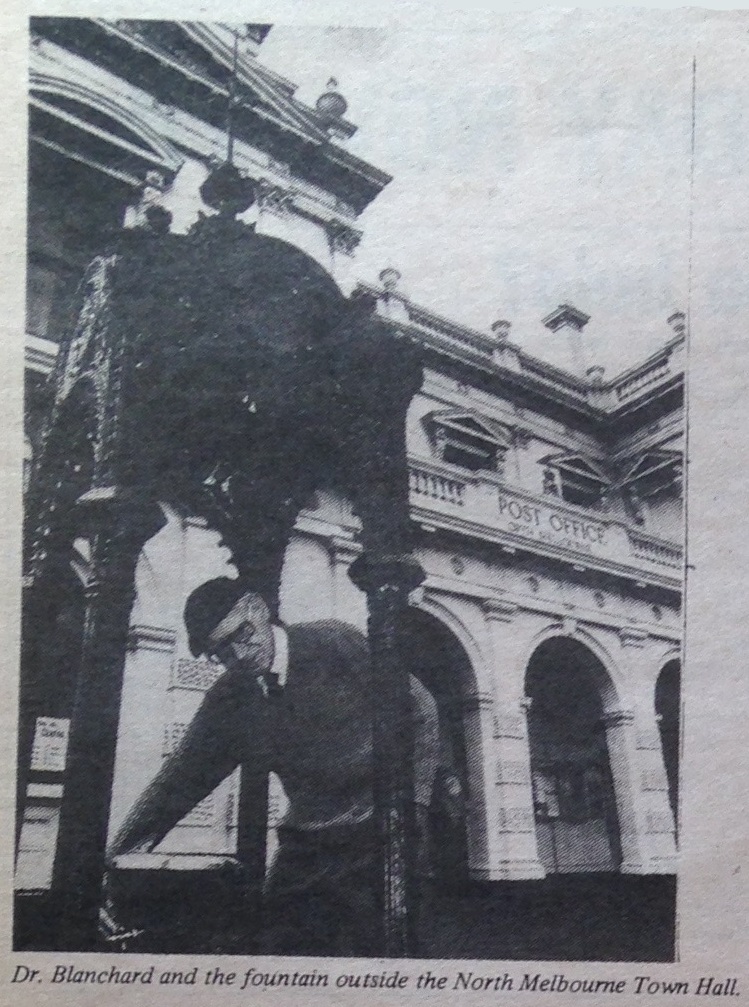 PAGES FROM THE PAST

A page from the 1 860 North Melbourne Directory lists the names and occupations of the citizens of our district over one hundred years ago.

What were their occupations? Saddlers, whip and thong makers, smith and stable owners. There are several carpenters, and a mason, and a large number of grocers, greengrocers, butchers, and bakers.

From such old documents we know that in the middle of the nineteenth century North Melbourne was an important area for gold miners to equip themselves and their horses with provisions for their trip to the gold fields of Ballarat, Creswick and Bendigo.

Large numbers of women were employed in the 1880’s when the large food preserving factories were opened by Rosella and White Crow, and the biscuit factories were built close to the wheat silos near Munster terrace.

King Street School was opened in 1876 with two thousand, three hundred and thirteen pupils, and twenty-one teachers. Errol Street School has a very long history. Its forerunner started in 1857 in a small house in Errol Street (it was called Mrs. Mattingley’s Infant School). Copies of “The First Hundred Years of Errol Street School, 1857-1957” are available at the school.

Have you ever noticed the contrast between the homes on opposite sides of Miller Street, West Melbourne?

On the south there is a mixture of cottages with some larger double-storey terraces which is a typical street-scape of the last decades of the Victorian era.

On the north, the more spacious red brick homes are typical of the period of the Great World War; the second decade of the nineteenth century.

From 1851 until 1911 the Melbourne Benevolent Asylum occupied the area which is now bounded by Miller, Abbotsford, Elm and Curzon Streets

A TRIBUTE TO DR. BLANCHARD

The article reprinted in this supplement “Northern History… When Hotham Made the Name Change” was printed in the Northern Advertiser on March 29 1973 as part of a regular series provided by the History Group for the local papers.

His well-researched articles on street names, local hotels, and historical events, and his anecdotes at meetings made a considerable contribution to developing a sense of history for those who are living or working in North and West Melbourne.

WHO WAS MRS. B. SMYTH OF ERROL STREET?

Mrs. Brettena Smyth was a forceful and talented widow who was described as “tall, muscular, well-developed, with perfect disdain for a broomstick waist”. She was well-known in North Melbourne where she had a drapers shop and druggist shop at 45 Errol Street for 24 years.

In 1882 she wrote a book called “Love, Courtship, and Marriage” which was published by Austral publishers.

She has been described as a feminist, free thinker, phrenologist, eugenicist, self-taught health reformer, birth control advocate, conventional moralist, and political campaigner who made a singular contribution to Melbourne’s social and cultural life in the 1880’s and 1890’s.

She gave public lectures on health and hygiene to overflowing gatherings in the North Melbourne Town Hall. She spoke on the Yarra Bank in support of Woman’s Suffrage.

Her lectures were on such subjects as “The Limitation of Offspring”, “What Makes Women Sick?”, “Barrenness and Sterility”, and other such radical ideas.