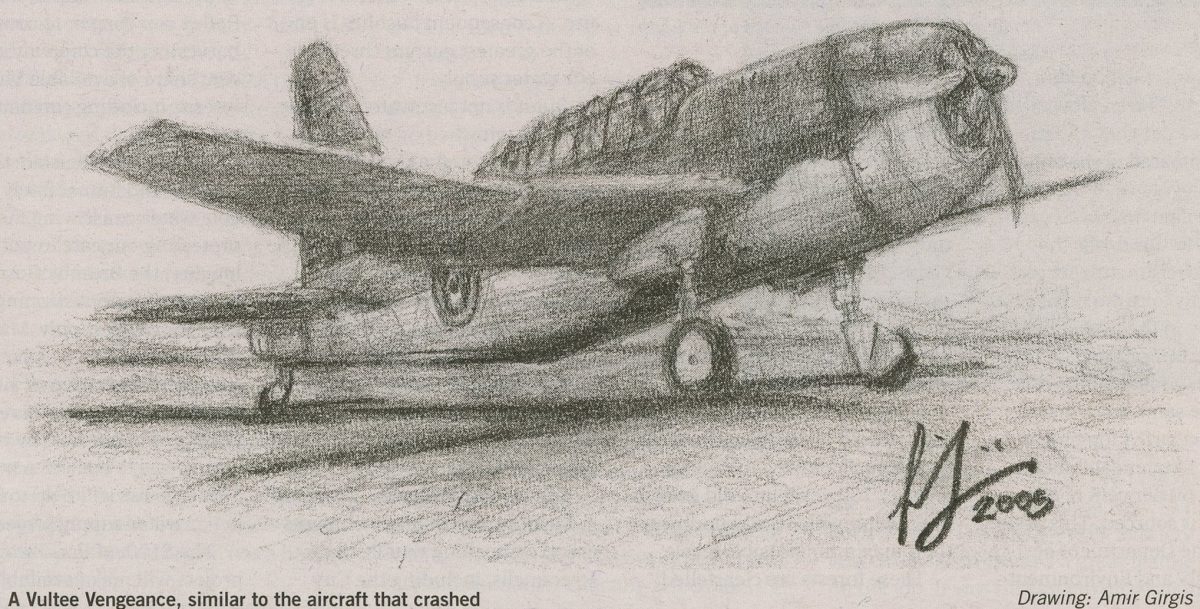 0ne of North and West Melbourne’s rare public reminders of World War II is a brass plaque on an industrial site near the Macaulay railway station. The plaque commemorates the death of the pilot and gunner of a Vultee Vengeance dive-bomber which crashed there on 4 September 1943.

By coincidence, I recently met a friend at the Haines Street bus stop who saw the crash. He was 12 then and with his father and 60,000 other spectators at a Flemington Racecourse air display intended to raise morale and money for war bonds.

I researched the newspapers of the time to find out about the incident. The Sun reported that the Vengeance flew over the racecourse from Footscray at a considerable height with the sun behind it, dived at 300 miles per hour towards the open area in the middle of the racecourse, and levelled off safely at 800 feet as a prearranged explosion took place on the ground. Almost immediately, it turned on its back and headed towards the higher ground of North Melbourne.

The Age added that the plane went into a roll as it pulled out of the dive. “It recovered momentarily and then went into a second roll, clearing the Flemington enclosure upside down.”

Peter Dunn’s website, Australia @ War, quotes Gordon Taylor, who was also there that day with his father and brothers. He remembered that “as [the pilot] started to climb it looked like the plane started a victory roll. When he was fully inverted he stayed that way and gently arced back down towards the ground and never recovered. As I remember it was a smooth roll and arc and there was no sign of an attempt to recover.”

The Sun said that for a moment “everyone hoped it had merely disappeared behind the hill but a huge mushroom of black smoke and flames told the story which shocked the gathering”.

The plane crashed into the grain store of the Victorian Wheat Growers Corporation just beside Macaulay Station. The Sun noted that “a fairly crowded train” was standing nearby. The plane tore through the iron roof, slammed into a brick wall and was reduced to fragments. It was Saturday afternoon, so no one was at work in the grain store.

Fire brigades from Melbourne, Carlton and North Melbourne arrived promptly, alerted on their recently installed radios by the fire chief, Mr Kemp, who was himself at the racecourse display. It took more than two hours to put the blaze out. Excitement was high. Thousands of spectators tried to souvenir bits of the plane. More turned up the next day and the police were called out to clear the area.

The plaque at the site of the crash records the deaths of the pilot, Flight Lieutenant Richard Henry Roe, 26, and Pilot Officer James Noel Harris, 25. Roe was from Benalla, and before enlisting in September 1940, worked in the Rolling Stock Branch of the railway building in Spencer Street. His companion in death, James Harris, formerly a salesman from Clifton Hill, had also enlisted in 1940, a month before Roe.

Roe, a noted ace pilot, had been mentioned in dispatches for “daring and skillful flying” and after his death was awarded the Distinguished Flying Cross for conspicuous courage in action. His home-town newspaper, the Ensign, called Dick Roe “Benalla’s greatest airman” and recalled that the week before his death he had done some “tricky” flying over Benalla in a Boomerang. Experienced airmen said they had never seen the like.

Reading through his file on the War Memorial website, I found that Roe fresh complexion, grey eyes, brown hair and a scar on the left of his nose — had shown an early interest in military service. At 18, he had joined the 58th Battalion. Like many lads who dodged the early closing of pubs, Roe copped a conviction for being in a “hotel after hours” in 1939. On 14 December 1940 and now in the RAAF, he was sprung again and confined to barracks for six days. The charge was “neglects to obey local order in that he on 14.12.40 at approx 22.45 hrs did drink in the bar of Federal Hotel Melbourne”.

Probably unrepentant, Roe left Sydney for Canada on 22 February 1941, landed in Vancouver on 3rd March, was in a transit camp in Iceland at the beginning of July, and reached England later that month. He had gained his flying badge, was most proficient in the Beaufighter, and during the rest of 1941 moved quickly through the junior officer ranks. The following March he sailed for Sydney and saw most of his remaining year-and-a-half in action in New Guinea. On 2 January 1943, he was reported missing in New Guinea but came back safely the same day. On 1 April, he was promoted to flight lieutenant.

All this explains why Dick Roe was a centrepiece act at the Flemington display. He had captained many types of planes, especially Beaufighters. No dive-bombers are listed in his return of flying hours, but we must assume that he was familiar with the tricks of dive-bombing and with the Vultee Vengeance.

Why then did he crash?

The Vengeance is now thought to be rather top-heavy for a plane that was to plunge vertically at several hundred miles an hour. This defect would make it difficult to pull up from the dive as the bombs were released. It is also said that the extreme gravity effects of a steep dive could cause momentary blackouts. These, however, were not problems for Roe’s Vengeance on the day.

He pulled out successfully and had the exuberance to do a victory roll. Whatever went wrong happened during the roll. A plausible explanation is that while the plane was upside down the pilot slipped into the top of his harness and was unable to get to the controls. The plane could not right the roll and arced with fateful grace into the wheat store by Macaulay Station. Its two crew members were ‘struck off the strength’ at Laverton that day.

Cyril Melbourne Roe received his son’s DFC at Government House, Melbourne, on 16 September 1944. At that time, his younger son John was a prisoner of war in Java having served in Timor for little more than a month.

Flight Lieutenant Richard Harry Roe, said the citation, had “participated in many low-level strafing attacks on Japanese strongholds in New Guinea at Buna, Salamaua, Lae and Madang and has always pressed home his attacks despite fierce anti-aircraft fire. On 4 March 1943 he took part in a low-level strafing attack on Malahang, and despite the fact that his aircraft was twice hit, continued to attack until all enemy aircraft were destroyed”.

Bill Hannan researched this story following the considerable interest in the Hotham History article about North & West Melbourne men who fought in World War l (Issue 144, March 2009, page 15) Bill is also the author of the Hotham History Projects Pride of Hotham, which tells the story of the North Melbourne Town Hall, and of the recently published The Best of Times, the story of the great expansion of secondary schooling Victoria in the 1950s and ‘60s.