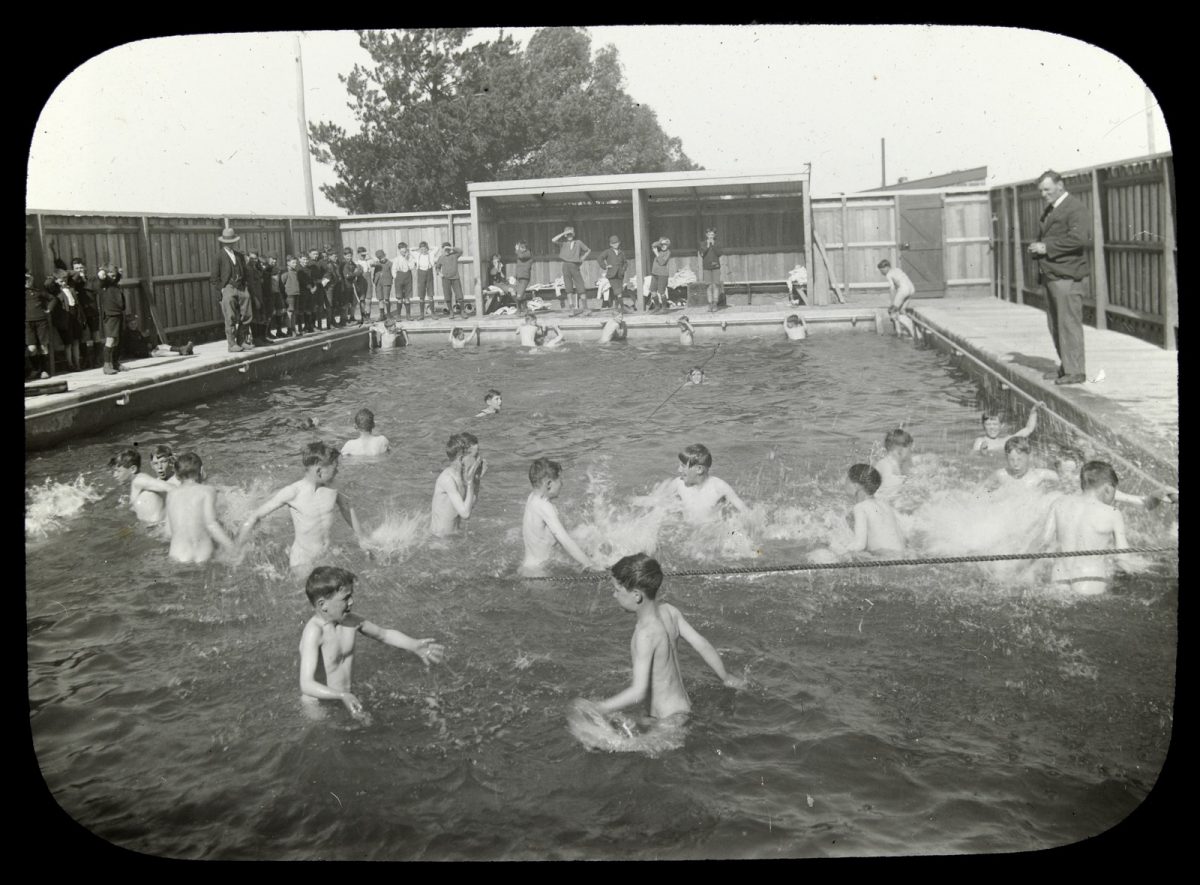 Laurie Davies was born 100 years ago. He lived his early life in Munster Terrace and remembered spending many hours enjoying himself at the North Melbourne Pool.

Years passed and when his brother, Jim, was caretaker at the pool in the l950s Laurie taught swimming to local schoolchildren. His memories of the pool are among the archives of the Hotham History Project.

These are the recollections of Laurie Davies.

“I started swimming at the pool when I was about seven years old. That was in 1923. The pool was just concrete, not tiles, and had an asphalt surround. I remember kicking and scraping the top of my foot against the side and it took weeks for the abrasion to heal.

The pool had a brick wall in the front and corrugated iron walls all around. There was no chlorination or purification of the water then. The entrance was in Macaulay Road.

The hours of opening were from 10.00am until 5 or 6 o’clock. There wasn’t much patronage during the day because everyone was working. It was still the era of the 48-hour week and most people worked on Saturday until lunchtime.

At the pool, it was men only except on Tuesday afternoons when girls were allowed in. Us boys were emptied out at midday.

The pool was never opened at night-time.

On Sunday mornings the pool would be emptied and we’d be allowed in free to scrub the moss off the walls with brooms. When it was refilled we’d get a free swim.

At that time, there was only one attendant, George White, who was a former Victorian boxing champion. Togs weren’t required and we swam naked.

A few years later, the attendant was Bob Rankin, who was a butcher who had lost some of the fingers on one hand. He worked for the butcher shop in Happy Valley and lived in the big brick house on the south corner of Erskine and Abbotsford streets.

In the late 1920s or early ’30s, the pool was tiled. Mixed bathing came in and there were other changes. They built a chlorination plant and housed it in a shed at the end of the pool and as well as that they put in two diving boards with a cyclone wire fence to keep the boys and girls separate.

The dressing shed for the girls was built on the eastern side, nearer to Dryburgh Street. It had a painted weatherboard wall, which got lovely and warm. We weren’t allowed over there. We were on the football side — the chilly side.”

When the pool that Laurie Davies enjoyed reached the end of its life, it was replaced after some years by the present pools, which remain substantially unchanged from that time.

Some upcoming events for the Hotham History Project

Wednesday 16 March, 7.30pm, at the Metropolitan Meat Market Workshop/display led by Peter Johnson titled ‘Arbiter of Style: The Talented Mr. George Johnson’ From quite humble beginnings George Johnson rose to become the most prolific designer of theatres and halls in Australia during the late 19th century. At his peak he was designing projects in four different colonies at once.

This display will explore some of George Johnson’s works including two heritage buildings that grace the streets of North Melbourne — the Hotham Town Hall (today’s Arts House) and the Metropolitan Meat Market.