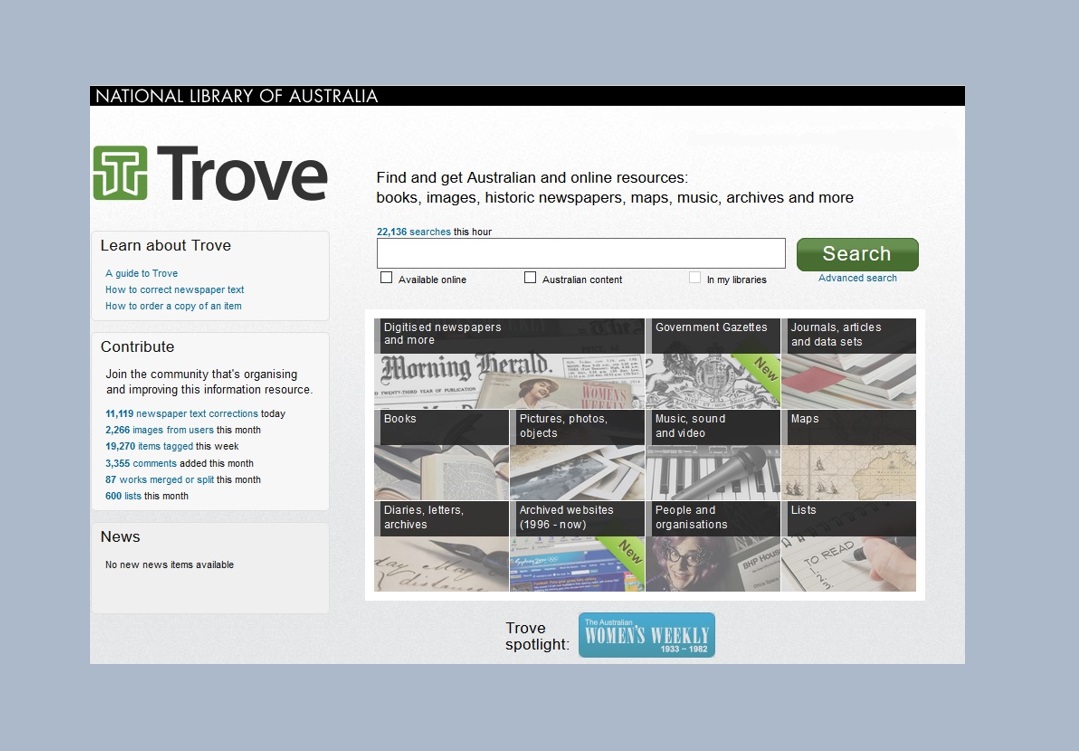 Trove is a true treasure. It is a free online search service that enables researchers to find information from digitised newspapers and other published sources. There, at the tip of your keyboard, are old newspapers of all sorts in facsimile and occasionally quaint transliteration.

One of the newspapers in this trove is the North Melbourne Advertiser, founded in 1873 by William Cook, one time mayor of Hotham, and published weekly until 1890. We went at random to the issue of Friday 6 June 1890.

A regular item on the front page was an ad from Atkins Pharmacy. Gary Bohmer now runs Atkins’ shop, still a pharmacy in Errol Street. The lane behind this long-running pharmacy is named after Atkins whose favourite medication was his home-made quinine wine, promoted in Hotham as a protection against influenza with 6000 bottles sold in a month.

Court and police reports were a weekly reminder that colonial Victoria was some-what lawless. The police lock-up next to the Town Hall and former Courthouse in Errol Street took in about a thousand a year, many of whom seemed to be involved in “alcohol-related” offences.

Then there was the man who this week had stolen a roll of silk from an Errol Street shop and admitted to having taken a “drop”; or “one of the greatest blackguards in North Melbourne”, accosted as he was spoiling for a fight in the small hours on Sunday morning down by the Boundary Hotel in Boundary Road; or the “champion hotel bully who went into hotels where the licensee was a woman and bounced drink out of her”.

And so to the footy. It’s an old report because North had played Carlton on the previous Saturday afternoon, when as we all know real football should always be played. The day had been “one of the gloomiest so far of the season, and many were the fears expressed lest a downpour should ensue”, fears that were much exacerbated by the “the big gun competition at Point Gellibrand battery and consequent series of concussions in the air”, which many clearly took to be thunderclaps.

The contest with an old enemy, Carlton, drew the crowds to Arden Street. “About 2.45 the approaches to the Recreation Reserve were thronged with people wending their way to the (indecipherable) ground, while the residents of Munster Terrace leaned over their garden gates, watching the vast mass of people which flock to the various grounds every week during the football season, like the crowds which gathered at a public execution in the days gone by.”

The rain held off and “the ground at 3 was a picture. Right round the large arena humanity was packed in dense masses there not being a single gap … The Press box was full–uncomfortably so–and when the play grew exciting and the occupants of the pavilion stood on tip toe, the reporters saw very little of what was going on the ground.”

Denied an unbroken view of the play, the reporter turned, as does today’s camera, to the antics of the crowd.

On the Kensington side of the ground a gentleman with a bugle entertained the spectators at intervals with short solos while some flags drooped lazily from poles in different parts of the ground among them being the ‘stars and stripes’, and the colours of North Melbourne. Sergeant Manson and a party of foot constables supported by two troopers kept their ground, but the behaviour of the crowd was good on the whole and the police had not much to do, except at the end of the game when there was a little trouble about the umpire.

“‘If one of the Coburg trains ran off the line and capsized, would it, do you think, take the attention of the public off the play?’ asked one spectator of another. ‘I don’t believe it would,’ rejoined the other, ‘unless, perhaps the engine blew up.’”

And so to the game:

“The North came out of the pavilion first amid yells from the small boys and the plaudits of the seniors…The barrackers of course were wild with excitement. Players were urged to ‘watch their men’, ‘play up’ and a thousand other things, while soubriquets of favourite men such as ‘Snowy’. ‘Dutchie,’ &c, were vehemently yelled out.”

“The play was rough. Needlessly so, and the ground being heavy there were some ugly tumbles and two or three slight injuries to some of the players. Houston and his men sustained their reputation but the afternoon ended in a draw of three to three.”

It seems that “The captain’s play was a feature of the afternoon, but some of his men were too much inclined to leave their places.”

So-and-so played a fine game but “his performances were not up to those of the previous week”; another played well “though the ball did not seem to favour him as much as could be desired”; the example of the back player “could have been imitated with advantage by his colleagues”. Another was “not the man of last week”.

Apart from commendably blaming the umpire for North’s loss, the Advertiser lapsed into some moralising that would not be unfamiliar today. First a denunciation of betting:

“Money was being laid pretty freely, and there were some gentlemen on the ground we fancy we have seen on the great race centreway behind the hill. Football excitement in this colony hardly needs the stimulus, one would think, of ‘a trifle on’, but this tendency among sporting communities has always existed. Only it must be remembered that if it is carried to excess, the game will be as perilous as some horsey pursuits.”

And finally an assessment of the values of spectator sport:

“There is a good deal of food for a cynic’s reflection at these weekly adorations of forty men kicking about a leather ball. Physical recreation is necessary certainly and the ‘boys’ are better running about and exercising their muscles than moping in pubs, but the absurd abandonment of some men of maturer years over the kicking of a goal is surely childish. Football is a game–and a fine manly one–but it is not the business of life or a people’s destiny.”

by Lorna Hannan, chair of the Hotham History Project. First published in June 2012 in the North & West Melbourne News.

Do you know more about North & West Melbourne? Email: info@hothamhistory.org.au