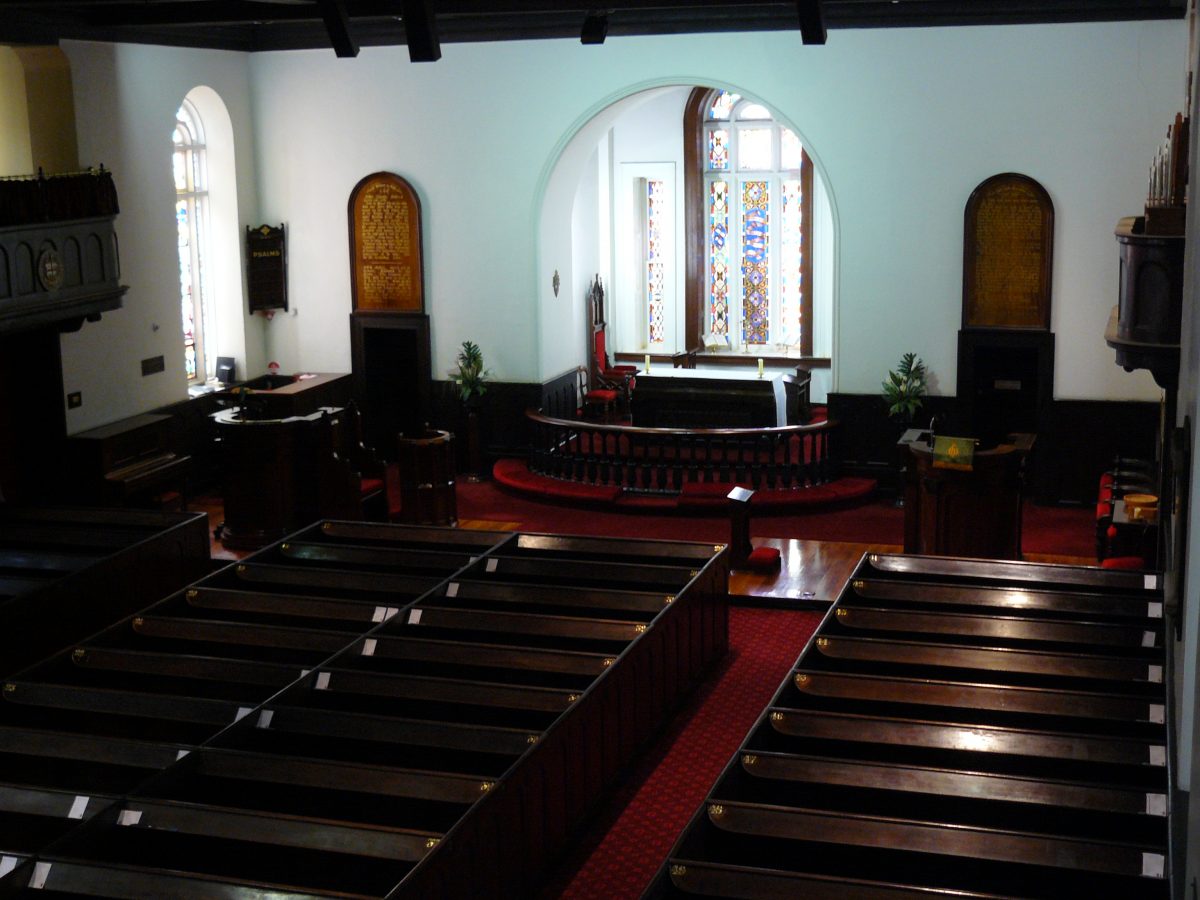 The attached   sermon focusing on the life and service of Canon Michael Henry Becher (1819-1883) was delivered by the current incumbent, Canon Matt Williams,   at the Annual Pioneer Service at St. James Old Cathedral on Sunday, 3rd November, 2019, a service attended amongst others by the descendants of many pioneer families with historic connections to this parish.  The fact that Canon Becher preached from the same pulpit from1861 to the end of his life in 1883 using texts reiterated in Matt’s homily vividly brought home the continuity of ministry.

As a member of the congregation and a committee member of the Hotham History project, I found the well-researched content and insights into the life of a minister in colonial times to be both inspiring and touching. Canon Becher faced many trials and tribulations during his ministry and he was much loved and revered by his congregation for his incredible dedication during his long tenure.

“I have determined to know nothing amongst you save Jesus Christ and him crucified.”

In 1861 Michael Henry Becher took up his appointment at St James’ Cathedral, Melbourne.

He stepped up into this pulpit, where I am standing, and taking 1 Corinthians 2 as his text he declared to the congregation, that like the apostle Paul, he was determined to know nothing amongst them save Jesus Christ and him crucified.

The forty-two year old would give this Cathedral church the rest of his life, twenty-two years, and never lost that determination, that clarity and simplicity of faith. He knew nothing amongst them save Jesus Christ and him crucified.

It was not a recipe for an easy life.

When he finally died from Tuberculosis, at sixty-four years old, The Dean of Melbourne, Hussey Burgh Macartney preached at his funeral, again, from this pulpit.

The Dean was himself eighty-four. He reminded the congregation of that first sermon, and how truly Becher had lived it out.

He couldn’t have spoken more highly of his colleague.

Michael Becher was his ideal of what a Christian minister should be, unsurpassed in his long experience.

“I never knew any one who combined all the powers which should grace a minister of Christ in such a degree as they were combined in him.”

The congregation loved him so dearly that they commissioned a huge marble tablet – an honour they would only repeat for the Dean himself and his wife Jane – and on that tablet they summed him up using other words from Paul in Acts chapter 20:

Ye know from the first day that I came, after what manner I have been with you at all seasons: serving the Lord with all humility of mind, and with many tears and temptations.

They erected the tablet, they wrote, in loving remembrance of his long and arduous labours in their midst.

It can be telling, when people have to sum you up in a few words, which words they choose.

His father ministered at Kilshannig in Ireland for 47 years, well liked, socialising with the gentleman class, arranging fox hunts for them and so on, and the congregation there also put up a marble tablet, in testimony of their affection and respect of their valued pastor and kind friend.

Those words speak volumes too.

But very different words were chosen for his son.

Loving remembrance. Long and arduous labours. Humility of mind, many tears and temptations. Knowing nothing but Christ, and him crucified.

It was not an easy life, and the congregation could see that. His father’s path was valid. His own path was harder.

In some ways it was a difficult life because of griefs beyond his control.

His first two sons had died in England.

The third died on the journey to Australia, of complications from measles.

The fourth son, Albert, died at six years old from Scarlet Fever, in 1867, which he only discovered after he recovered from a life-threatening illness himself.

Altogether he buried seven of his sixteen children.

At the same time he himself had major episodes with illness and never returned to full strength after the illness at the time of Albert’s death.

In 1875 he was stood down for three months by his doctors.

In 1881 the parishioners appointed him a curate specifically and publicly because they were anxious for his health.

He finally died of Tuberculosis, age 64, in the long, painful way that disease has.

So it was a difficult life, in the way that many lives then were difficult.

But it was also a difficult life because he chose to spend it knowing nothing but Jesus Christ and him crucified.

This wasn’t just about of the subject of his preaching.

It was the manner of his living, the dangers he took on unnecessarily, that he might make sure Jesus was known in the smallest corners of Victoria.

He was determined to spend and be spent for his crucified Lord.

Like Paul, he took on unnecessary sufferings and perilous journeys he didn’t shrink from arduous labours he took up his own cross and followed Jesus.

The story of those labours in Australia actually starts before his arrival in 1861.

He was born into a comfortable clergy family in Cork, being raised in Kilshannig.

At the age of sixteen he was sent for private tutoring in Bath which prepared him to go up to Cambridge, where he graduated with honours in Mathematics.

The Bishop of Cork ordained him, and two years later his family connections got him a comfortable rectors appointment with two hundred pounds a year at Barnoldby-le-beck in a very pretty part of Lincolnshire.

He had a lovely 13th Century church, recently renovated, a pretty Georgian rectory and only 269 people living in his whole parish, which made for a manageable workload.

He was the rector there for fifteen years.

It could have been a very pleasant life.

But he was determined to know nothing other than Jesus Christ and him crucified.

He was a bible man, when all was said and done.

He had his views about what the bible meant, certainly, but he wasn’t a sectarian,

he wasn’t obsessed with denominations, he was a bible man willing to work with other bible people wherever he found them.

He had a deep belief that the most good he could do was to put the bible in people’s hands so they could read it for themselves and by reading it come to know Jesus Christ crucified.

And because of this belief he threw himself into the work of the British and Foreign Bible Society.

The Bible Society was founded in 1803 by a group of evangelicals including William Wilberforce.

It’s sole aim was to get bibles everywhere they could.

In 1853 they celebrated a Jubilee Year and resolved to redouble their efforts in the colonies.

Becher volunteered for a two-year round trip to Australia, and they sent him off with their blessing.

He was granted a leave of absence from his parish and boarded a ship in October 1854.

His journals and letters from that trip are in the Cambridge University Library and I’ve been able to read copies of them.

I have to say, they’re kind of breathtaking.

He travelled throughout Tasmania, then NSW, then Victoria and South Australia, going from cities to regional towns to hamlets and farming districts, and everywhere he goes he is inventing ways to further the aims of the bible society.

In one place he will speak to crowds of hundreds, establish a new branch or auxiliary of the society and inspire gifts equal to $20K in one night; and then in the next place he will chat to a local store owner to arrange a depot where scriptures can be obtained.

In some towns, like Benalla, he was unwelcome or treated with suspicion, in other towns he received the most liberal hospitality.

He made his way to places so remote that they hadn’t had a minister pass through in years, and so he door knocked every house and invited them to a church service and ran it on the Sunday.

He never stood on his dignity, he always just mucked in and did what was needed whether it was basic scripture distribution or inspiring crowds of wealthy gentleman to support the cause.

In the course of his visit he took the Australian Bible Societies from having 11 branches to 99; mapped out strategies for their continued work to the regions, and raised 2150 pounds in collections, the equivalent of about four hundred thousand dollars today.

Bishop Perry was the chair of the Branch in Melbourne, and he was so impressed with Becher’s report that he assured him there would be a job for him in Melbourne should he ever wish to return to the colony.

And it wasn’t an idle wish, for in what seems to have been a prior arrangement Becher’s arrival in Melbourne saw him go straight from the ship to stay at the house of a solicitor, Mr Jennings, who had a 21 year old daughter.

Six weeks later Becher married Philippa Jennings at St Kilda, and took her for a week’s honeymoon in Heidelberg before continuing his travels throughout Victoria and South Australia and taking her back with him to Barnoldby-le-beck.

So although Hussey Macartney was the Dean of Melbourne, he had many diocese-wide duties helping Bishop Perry and the day-to-day incumbency of St James’ was too much for him along with everything else.

The role was offered to the industrious Becher, and he brought his wife back near her family to take up the incumbency of St James.

He lived in the Deanery on site, which you can see sketched in a picture at the back of the church, and from then on he was the secretary of the Victorian Branch of the British and Foreign Bible Society.

He was particularly interested in the forty-thousand Chinese men he found scattered around the gold fields.

He saw this is a great opportunity, and ordered 4500 bibles in Chinese for immediate distribution amongst them.

Back in England, He argued that it was an especially good investment to make sure the Chinese men heard the gospel and received the scriptures while they were in Australia and free to do so, unhindered by their local religious leaders or despotic governments.

It was strategic because they weren’t planning to stay, they had wives and children back in China, and then they would take the message of Christ with them back into the deepest reaches of the Chinese empire.

This happens to be the same missionary strategy we have today at St James’, not just for China but for countries all over the world.

I think Becher would be pleased.

Each Wednesday afternoon volunteers assemble next door to offer free English Conversation Classes, to anyone who wants them.

A bible story is taught, often by Sarah Raiter or Reverend Jess.

Students are invited for dinner and bible study afterwards, and a team of people from St James’ join them, including Dan and Rachelle and Sarah and Lisa.

We have bibles in simple English and in a variety of other languages to give anyone who comes to the classes.

I used to buy those bibles – literally hundreds of them each year – but then we found out that there was this organization that was quite willing to give them to us to give away.

Guess what that organisation is?

It would have been Becher’s 200th Birthday this year, and it’s been a joy to read his journals and discover how much of him has found a renewed expression in our ministry.

We honour his legacy today by being bible people: people who give away bibles, people who read bibles with people before they return to the far reaches of the globe, having learned to know nothing save Jesus Christ, and him crucified.

Preface by Jenny Cook, a member of the Hotham History Project. Story by Canon Matt Williams. Address given in November 2019. Republished with permission.