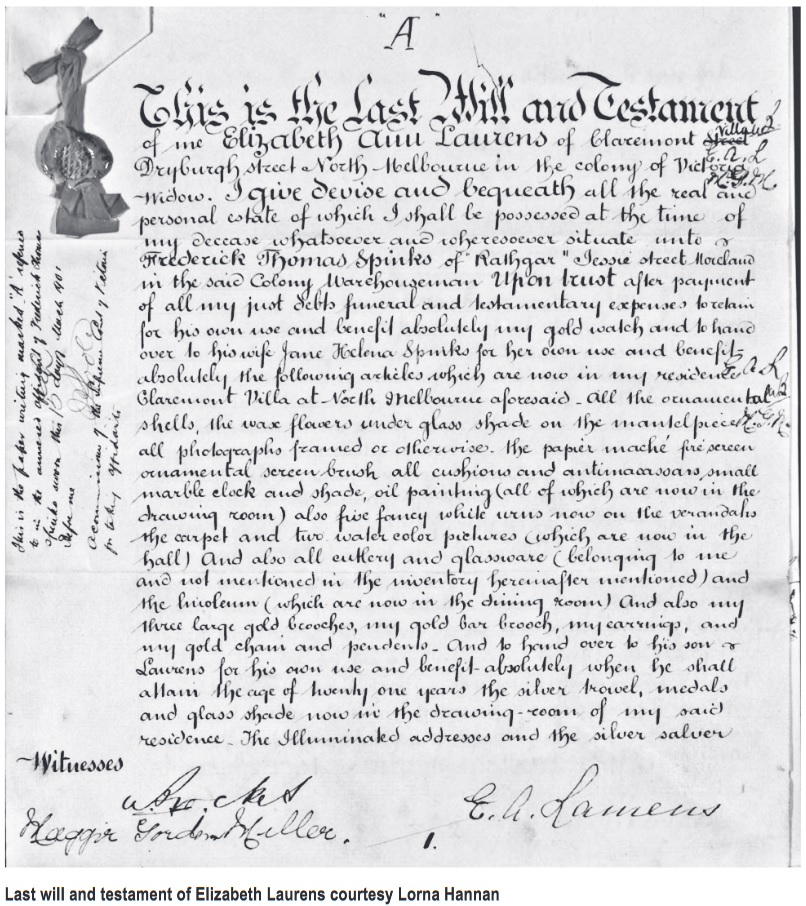 John Laurens deserves to be remembered by people who live in North and West Melbourne. He was the first treasurer of the Hotham Mechanics Institute, which later became the North Melbourne Library. When you stand opposite the library on Errol Street, you will still see the words ‘Mechanics Institute’ on the wall of the building. In his role as treasurer, John Laurens was most persistent in negotiating for a Victorian government grant to help establish a municipal library. His success helped to ensure that we have had a library in Errol Street ever since.

John Laurens did not live in Laurens Street. Very few of Hotham’s former mayors and councillors did live in the streets that later came to have their names. Mr Laurens lived in Claremount Villa in Dryburgh Street with his wife Elizabeth and her daughter by a previous marriage. The actual house is no longer there, but our best guess is that it was on the site of the present Ukrainian cathedral. Mr Laurens was for many years active in public life. As well as being a local councillor for 21 years (1870–1891) and mayor of Hotham from 1872–1873, he was also a member of the Legislative Council from 1877–1892. In these various roles, as the press noted at the time, his speeches earned him the nickname ‘Windbag’. You can find more colourful details about John Laurens and his career in Heather McKay’s Men of Hotham and Bill Hannan’s Pride of Hotham, both publications of the Hotham History Project.

Documents retrieved from the Public Records Office site show that when John Laurens died of liver cancer in 1894, his estate owed a small sum to the Collins Street doctor who had been treating him. Apart from household furniture and linen, the only personal item which is identified in the will is ‘an old silver watch’ valued at fifteen shillings. His wife, Elizabeth, who was already a widow when they married, was one of the 800 or so local women to sign the Monster Petition of 1891 which sought voting rights for women in the colony of Victoria. She was to die about seven years after John, having lived to see Federation come to pass but not yet having the opportunity to cast a vote.

Elizabeth’s will, which was made about two years before she died, seems to the present day reader a much more engaging document than John’s will. She refers to many belongings about which she is most particular and her instructions about who should get what are quite specific. Her main benefactor was to receive articles from the drawing room: her collection of ornamental shells, the wax flowers under the glass shack on the mantelpiece, framed and unframed photos, the papier-mâché firescreen, all the cushions and antimacassars in the room, and a small marble clock. These details are interesting because they provide glimpses of what her house might have been like and how she lived in it. In addition, the same beneficiary also inherited five white urns from the verandah of the house and particular items of jewellery: three large gold brooches, a gold bar brooch, earrings, a gold chain and pendants. Elizabeth’s personal belongings outnumber those of her husband and are certainly more valuable.

All Elizabeth’s wearing apparel (not items that one would expect to find in a modern will), including her gold brooch with the monogram engraved on it and five pounds in cash, are to be given ‘for her sole use and benefit’ to Lucy Dudderidge as ‘a mark of appreciation of her long and faithful service’. Lucy must have been a servant or a lady’s companion. The papers submitted for probate show that Lucy was also paid seven shillings which may have been owing to her in wages. Allisons, the Errol Street undertakers of the time, charged twelve pounds for Elizabeth Laurens’ funeral, and she was buried with John in an unmarked grave in the Methodist section of Melbourne General Cemetery.

The Buncles, another prominent Hotham family at the time, appear to have had much more property to dispose of than the Laurens. John Buncle had arrived in Melbourne in 1852 with his wife. He was then a 28-year-old and father of three. He settled in Hotham, had two short terms as a municipal councillor (one as mayor) and went on to establish himself as a highly successful engineer and manufacturer of agricultural instruments. His businesses were not in Buncle Street but in the vicinity of Vale and High streets and up towards Flemington Road.

When he was preparing his will, John had quite a lot of valuable property to dispose of, including factories, 14 rented houses and a hotel. John directs his property and income to his wife Mary Ann ‘for the term of her natural life so long as she remains my widow’. He goes into further detail explaining, ‘In the event of my wife remarrying, I direct my trustees to allow her the sum of one hundred and fifty pounds per annum from the rents and profits of said houses.’ Thus Mary Ann will still be provided for, but these provisions would alter should she re-marry, which she did not.

When Mary Ann died a widow in 1895, the papers that list her property value her furniture at one hundred and thirty pounds and plate, which is probably silver, at fifty pounds. The depression of the early 1890s had wiped out much of the wealth the Buncles had accumulated. Her will states that her personal belongings would go to her daughter, except for a family Bible which had belonged to her mother and father and was now to be handed on to her sister. All else was to be divided equally between her children with no differentiation between her sons and daughters. Her parental care, parceled out in equal bundles, carried on beyond her lifetime.

These wills and probate papers are all available online from the Public Records Office of Victoria. With the help of a few names and dates, you may be able to find information about your family or previous residents in your house or street. The Public Records site is easy to use. Click on Accessing Wills and Probate Records and follow the prompts provided for 1841–1925, 1926–1992 or 2001 onwards. There is also information in PROVGuide 68 which is about accessing original wills and probate records.

If you are interested in the work of the Project, you will find lots to interest you on our website www.hothamhistory.org.au