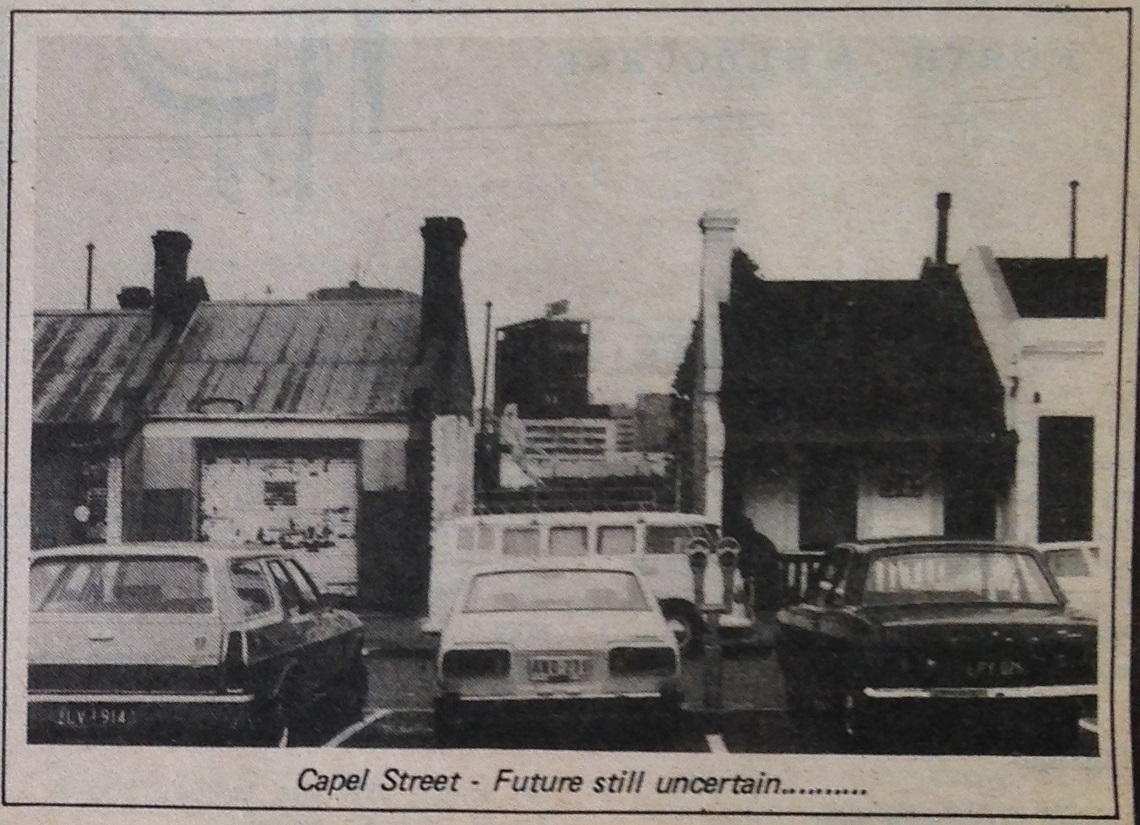 Described by a local estate agent as the Melbourne City Council’s Watergate – Capel and Peel Street’s future is shrouded with secrecy.

However the State Government later declared that they did not intend to make the Capel Street block part of project. But the buying of the block by the M.C.C. kept going: the then Chairman of the Finance Committee CR. Rockman asked the Town Clerk the reason for continuing to buy the block. He answered that it “Council policy”.

In 1976 residents and owners of small businesses met, alarmed at the Council’s actions; formed an action committee and asked the Council to state it’s policy. There was a considerable panic amongst the City Fathers and they hastily tried to white-wash the situation by giving a story to Channel 0 news inviting residents to help plan the area.

No resident or business was contacted, however, and the only way the residents found out was when one resident sighted a short, opulent looking gent strolling around the vacant lots surrounded by the news team.

When asked what was the future of the block the opulent gentleman seemed to have his own ideas. Pointing to the back of a row of terraces, he said, “we’ll get rid of that ugly eyesore and clean up the whole area.”

Today, after the council has acquired over 90% of the block, they still have no stated policy on the future of the block. The property officer Mr. Ray Brench has let some residents know that their leases expire in February 1981 and said in one letter that “ultimately the premises will be demolished to make way for future development”. This statement resulted in a rap over the knuckles by CR. Lethlean (who stated support of the Ca-Peel Action Group before his election to Council) who said in an answering letter:

“That the Council has not made a policy decision as to whether the above premises will be demolished. It may be that these premises along with a number of other residential premises in Capel Street will be retained in the overall development.” Development seems certain, but what sort? CR. Irwin Rockman said “we want to see some better development than is there now, but I don’t necessarily expect the Council itself to do it.”

This statement indicates that the area will be sold to Private Developers and vested interest. Since last year locals have been aware of many gentlemen pacing the streets, measuring and inspecting the properties. They know something is going on but have no proof and the Council is still quiet.

It seems to be a dangerous precedent when a corporate body can buy property of their own choosing, threaten owners with compulsory acquisition so that the owners get less than the value of the land and then sell to private developers!

The M.C.C. has now spent nearly 3 million dollars on acquiring this land. All of it with ratepayers money and at a time when the Council is crying poor. And for what? – the residents, the ratepayers, the people of Melbourne have a right to know. They also should have proof that no councilor or member of their family has or had any vested interest in any of the Companies that are likely to buy, sell, or redevelop the area.

As many of the Councillors (11 out of 17 of the Civic Group Councillors are millionaires) are in the business of real estate the whole matter should be thoroughly investigated.