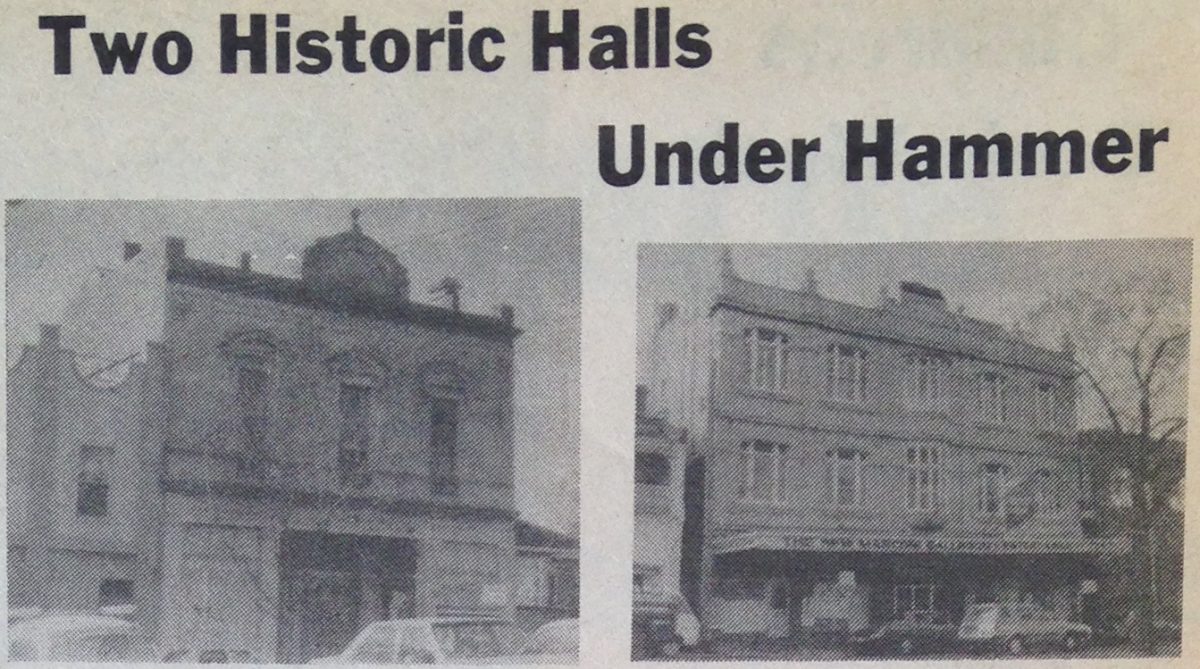 Two halls in North Melbourne which have been closely linked to labor history will be auctioned during September.

One is the “People’s Hall” at 456 Queensberry Street, and the other the “Loco Hall” at 562 Victoria Street.

Here is some information about these North Melbourne landmarks.

Last century the hall at 456 Queensberry Street was called the “Good News” Hall but for most of this century it has been known as the “People’s Hall”.

The building has not been used for several years. This is in stark contrast to its earlier history.

It was built as a vaudeville theatre in 1870, but before the turn of the century it was the home of the first Pentecostal Assembly of Australia. The hall seats about 300 people and prayer meetings were held every weekday as well as on Sundays.

Each Thursday was a “tarrying meeting” designed to enable people to receive the baptism of the Holy Spirit.

The name `tarrying’ was derived from the words of Jesus who bid his disciples to “tarry” in Jerusalem until they were clothed with the power of the Holy Spirit.

Here is a published anecdote about “Holy Rolling” at the “Good News Hall.

“There was a man seeking the fullness of the Spirit. He was prostrate on the ground, but as he prayed, he began to move. Slowly he started rolling, he rolled from one side of the room to the other. Then he rolled back again. This was repeated several times. To the Good News Hall people there was one saving grace ‘They got the baptism’ “.

During the Great War, the Good News Hall was purchased by a group of socialists. Most of the money to buy the property was raised through collections at Free Speech Meetings.

When the British socialist Torn Mann came to Australia about 1917, he was banned from speaking in all public halls, therefore his socialist supporters decided to buy their own hall and renamed the Good News Hall the “People’s Hall”.

In the 1940s the People’s Hall was rented to the Eureka Youth League and renamed “The Betty Sutherland Memorial Hall” in memory of a young leaguer who was killed in an accident.

For about thirty years the hall was used for all sorts of youth activities and it was a mecca for artists, writers, sportsmen and women, dancers, Rim-makers and jazz enthusiast.

If the thick old walls could talk they would tell of jazz musicians Graham Bell and his world famous band, cartoonist Amby Dyson, the adventurous international correspondent Wilfred Burchett, Wendy Lowenstein the historian, Margaret Walker and the schools of creative dancing known as the Unity Dance Group and the Waterside Workers Children’s Dance Group, Dave Stephens the “flying milk-man” who broke world records for long distance races, Audrey Blake who is one of the three stars in the recently released film “The Red Matildas”, and many others including some of the best known Victorian trade unionists.

In the past few years several organisations have considered how the hall could once again live up to its name of the “People’s Hall” but for various reasons (such as the exorbitant cost of rehabilitating the building for public use, and the problems associated with the fact that it is now in a residential zone) none of the plans have been able to be realised. Now the Trustees have decided to sell by auction, and it will go under the hammer on September 18.

The Loco Hall at 562 Victoria Street was built in 1914 by the Australian Federation of Locomotive Enginemen. “This union is the oldest continuous railway union in the world”.

The union decided to buy the building after a national railway strike in 1903. The picture theatres were just beginning to become popular and it was decided to include a picture palace as part of the building in order that the project could pay its own way.

Originally the tiered seating held about 1000 people but some years ago seating was removed, and the floor levelled so that the hall could be used as a dancing palais. It has, since then had various uses and is now called the “New Marconi Ball Room”

The name “Loco Hall” is emblazoned in masonry at the top of the building and above the name there is a model locomotive. This hall will be auctioned a week before the “People’s Hall, on September 11.

by an unknown author, first published in the North Melbourne News, No. 41, Page 7.